One of the most beautiful botanic gardens in the world'. An Englishman built a house here in the early nineteenth century. Cecil Rhodes bought the land in 1895 and owned it until he died in 1902. He bequeathed it to the Government and the development of a botanic on the eastern slopes of Table Mountain garden began in 1913. There is an avenue of camphor trees, Useful Plants Garden, Sculpture Garden, Protea Garden and a dell garden. Kirstenbosch has a dramatic site and a superb collection of South African plants. Summer Sunset Concerts are held in the garden on Sunday evenings from December to March. 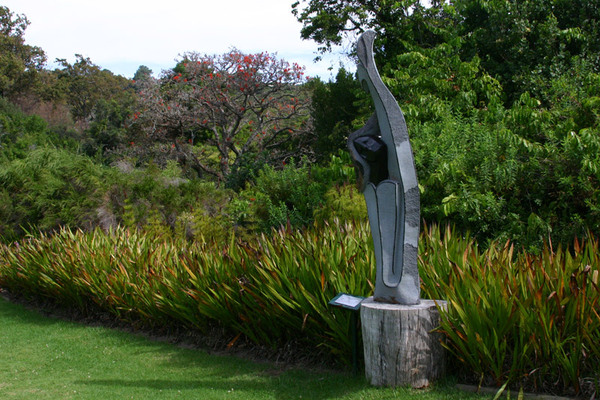 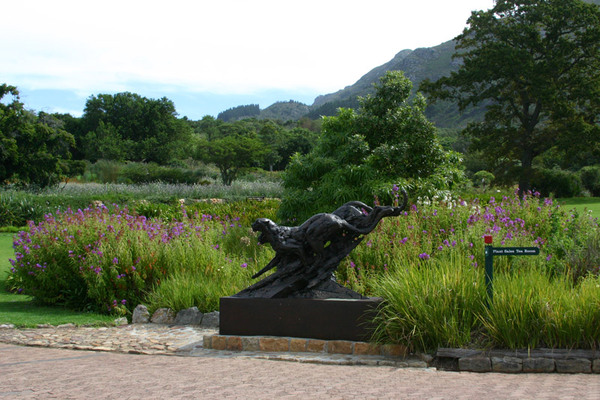 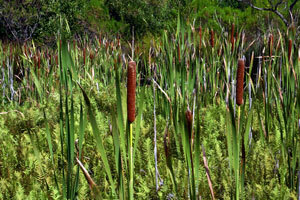 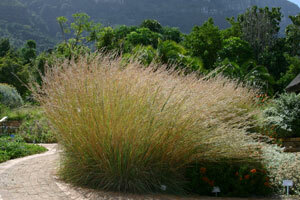 People used Kirstenbosch long before the arrival of the European settlers in the 17th Century. Traces of large pear-shaped stone implements and round perforated stones which were used to weight pointed digging sticks are all the record that exists.

In 1660 a hedge of wild almond (Brabejum stellatifolium) and brambles was planted to form the boundary of the colony. Sections of this hedge, known as van Riebeeck's hedge, still exist in Kirstenbosch. The forests were harvested for timber during the early years of the colony. Little is known about this early woodcutting period but overgrown tracks where the timber was hauled out of the forest and small ruins can still be found.

The English Occupation in 1811 brought about a change. Two large grants of land were made. Colonel Bird built a house at the foot of Window Gorge, planted chestnuts and probably built the bath in the Dell. Henry Alexander built a house on the site of the old tea house.

The Ecksteen family acquired both properties in 1823 and later the land passed on to the Cloete family. They farmed the area and planted oaks, fruit trees and vines. This photograph shows the Ecksteen home around 1900. It stood on the site of the present Lecture Hall.

In 1895 Cecil Rhodes purchased the property from the Cloete family and appointed a caretaker. The land became rundown with masses of pigs feeding on the acorns and wallowing in the muddy pools. Rhodes Avenue, also known as the Camphor Avenue, was planted in 1898. (This photograph was taken around 1930.) In 1902 Rhodes died bequeathing Kirstenbosch to the people as part of his great Groot Schuur estate.

A garden is born
Professor Pearson came to South Africa in 1903 to fill the newly established Chair of Botany at the South African College. In February 1911 Pearson hired a Cape cart and, upon the suggestion of his friend Neville Pillans, visited Kirstenbosch to assess its suitability as a site for a botanic garden. On 1st July 1913 the wild and overgrown estate of Kirstenbosch was set aside by the Government with a grant of £1 000 per annum. Pearson was the obvious choice for a director but there was no money for a salary. He accepted the task in an honorary capacity.

Margaret Levyns, described Pearson's house at the garden as "consisted of two small, rat-infested rooms, damp in winter and dusty in summer. Cooking was carried out in a lean-to structure outside".

Finance was a great problem and in those days, the Government grant was supplemented by the sale of firewood and acorns. What confronted Pearson, when work started on the garden were, the ruins of the Cloete homestead, thousands of pigs, weeds in the orchards and bush that obscured the bath. He began with what is known as the "Dell" planting cycads. The picture, circa 1915, shows Encephalartos latifrons.
In 1916, at the age of 46, Professor Pearson died from pneumonia. This was a severe blow to the garden. Buried in the garden his epitaph is - "If ye seek his monument, look around".

Garden Development
Early developments were the Cycad Amphitheatre, the Dell below the bath and the Main Lawn. This photograph taken around 1925 shows the Director's Office, Library and Plant recording offices.

A great deal of rocks and soil were transported to create an Aloe koppie which Pearson had hoped would be the Garden's most outstanding feature. The aloes succumbed to rust and other diseases.

Because of the interesting and sometimes challenging topography, a great deal of construction work has been necessary. The use of local Table Mountain Stone has been a dominant feature. Cobbling, curbing, dry stone walls, rockeries and stone features of a high standard illustrate the talent of the staff who contributed significantly to the development and history of Kirstenbosch. The photograph shows the entrance to Kirstenbosch circa 1939.

In the first 50 years most of the work was manually done - trolleys, mules, carts, crawlers - today much of the work is mechanised, either using the Garden's own machines or hiring equipment.

Missions and mottos
The mission and objectives of the garden have grown and developed through time.

1915 - Prof Pearson spoke of research, education and the preservation of our vegetation.

1955 - The chief objectives were scientific and educational - involving collection, study, display and preservation.

1996 - To contribute significantly to an improved quality of life for all South Africans, within a dynamic organisational environment, through promoting the conservation and sustainable use of our indigenous plant life.

1998 - To promote the sustainable use, conservation, appreciation and enjoyment of the exceptionally rich plant life of South Africa, for the benefit of all its people.

Late July and August mark early spring at Kirstenbosch. Cold fronts with low temperatures and rain are still common, but the days are longer and the new growth of spring is everywhere apparent as the bulbs and first of the annuals start to flower.
Many of the fynbos plants like proteas, ericas and buchus are in flower.
From the huge heads of our national flower, the King protea (Protea cynaroides) .....
...to the small pink bells of the berry heath (Erica baccans) and the aromatic confetti bushes (Coleonema album), the fascinating richness of indigenous Western Cape plants are displayed.