Tilaurakot, Kapilavastu, is the place where the Buddha's family home and garden were located. It is possible that the brick remains are those of the former palace but the garden has gone.

Babu Krishna Rijal  wrote that '‘The Sanskrit Buddhist texts of [the] early Christian era speak of the the town of Kapilavastu as Mahanagara, the narrow streets of which were thronging with elephants, carts, horses and men. Ashwaghosa has compared the town with Giribraja. It was encircled by a wide moat, high walls and well demarcated streets. The Sakyan houses facing [a] street were decorated with balconies and belvederes. They were covered with white chunam plaster and some times  brilliantly painted in fresco with figures or patterns. The ancient towns. According to to Prof. Rhys Davids, were built with strong ramparts, lofty walls with buttresses and watch tower and big gates. The city was surrounded by a moat, sometimes even by a double moat, one water and one mud. In the royal palace there used to be the accommodation for all the business of the state and for the numerous retinue and the extensive harem. The superstructures of all dwelling will be either of woor work or of brick works.’ [Source given as Hermann Oldenberg, Buddha: his life and doctrines, His order (Varanasi, 1971 reprint pp 95, 97)] ‘Kapilavastu had seven walls according to Jataka. Mahavastu has also mention of these walls, seven in number’. Beautiful gardens, groves, orchards, tanks and luxurious resorts were abundant in the Sakya Kingdom’.

See note on Buddhism and Gardens. 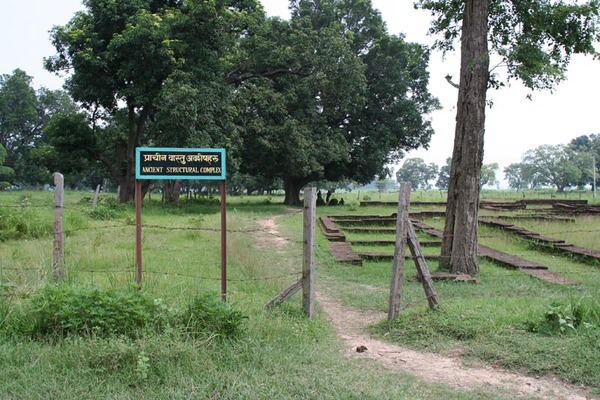