A botanical garden founded in 1857 by Gustave Thuret (1817-1875) and specialising in plants which are rare and tender not often seen in Europe (eg from the Canary Islands, South Africa and New Zealand). George Sand wrote, in 1868, that 'Placed on a spit of land between two gulfs, it offers an undulating grouping of trees of all forms and of all nuances, which are enough high to hide the foregrounds of the surrounding landscape [... ] One is in an Eden which seems to swim in the vastness'.

Villa Thuret has been a research site dedicated to botany and acclimatization since 1857. Created by Gustave Thuret, a botanist and specialist in algal biology, it was the first privately funded research laboratory to be set up in France. Gustave Thuret carried out systematic acclimatization on trials with exotic plants, in collaboration with the Museum of Paris and with the assistance of Edouard Bornet. His work was pursued by his successors, Charles Naudin and Georges Poirault. In addition to generating scientific data over the years since its creation, this garden, through the introduction of exotic species, has also contributed to the creation of the landscape of the Côte d’Azur and the rise of Mediterranean horticulture. Gustave Thuret entertained not only the scientists of the time at his villa, but also numerous diplomats and artists. In her “Lettres d’un voyageur” in 1868, Georges Sand described it as: “...The most beautiful garden she had ever seen...” In 1878, Villa Thuret was donated to the French state. It is now permanently affiliated to a higher education and research establishment. The entire site, including the research laboratories and the collections (herbarium, library, botanic garden) is currently managed by French National Research Institute for Agriculture, Food and Environment (INRAE).
The history of the garden
The French Ministry of Culture classified this garden as a “Jardin remarquable” (remarkable garden) in 2007. A number of the trees it contains were awarded the status of “Arbre remarquable” (remarkable tree) by the A.R.B.R.E.S association in 2015. In 2017, the garden was labelled “Jardin botanique de France” (Botanical Garden of France). In 2018, the garden and its villa are labeled «Maisons des Illustres» by the Ministry of Culture. A garden recognised and accredited
Villa Thuret botanical garden Experimental unit Villa Thuret of INRAE
Photo INRAE, C. Slagmulder 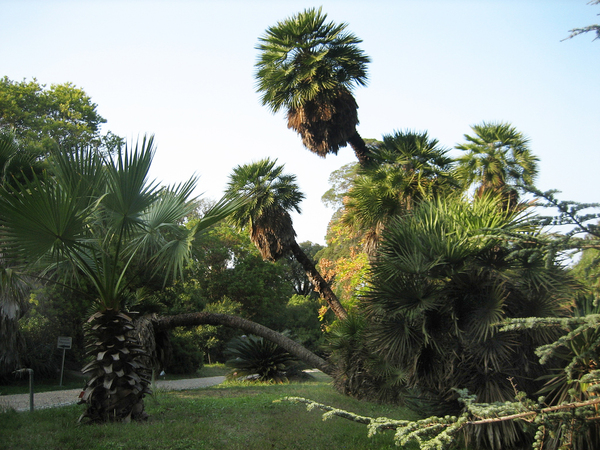