Green Islands Gardens is a 20 acre triangular garden created by garden designer Fiona Edmond after 1996. There is a series of garden rooms including a Japanese garden, water garden, gravel garden and a seaside garden and also woodland areas planted with Azaleas, Rhododendrons, Camellias and spring bulbs.

GREEN ISLAND GARDENS
Ardleigh
Green Island Gardens is a professionally designed Garden by the owner Fiona Edmond. She and her family moved there in 1996 when she was seriously ill with ME. Over the following 12 years working on the garden has been her â€œtherapyâ€. With the illness now stable she runs the gardens and nursery as a full time business.
The site is a 20 acre triangular â€œland islandâ€ which originally belonged to the big house Ardleigh Park that is opposite. Most of it was planted as woodland around 1900, but the great storm of 1987 destroyed virtually all the oak trees. When Fiona moved to Green Island she inherited the resulting jungle where sycamores and brambles had sprung up and colonised every bit of ground left by the fallen oaks and chestnuts, and left the woodland completely impassable.
The island has its own unique microclimate where many plants, often of borderline hardiness now thrive. The soil is thin acid sand over heavy clay in parts and ballast in others, which provides great opportunities for growing a huge range of plants.
The gardens now consist of huge mixed borders edged with timber from the woods, amongst generous lawns that have beautiful specimin trees as focal points. These are packed with plants of interest all year round but the colour peaks in late June and July.
A seaside garden was designed in 2000 in front of Nightingales which was originally the housekeepers cottage when the property was built in 1958. This has a large deck area constructed with railway sleepers around an angular shaped pond, a patio area and the rest is covered with gravel and boulders for moisture retention and weed suppression. The planting here is of silver and purple foliage with flower colour limited to pinks, purples and blues. There are many unusual and tender shrubs from New Zealand such as Leptospermum, Corokia, Melaleuca, and Lophomyrtus, as well as the unusual Cercidiphyllum Rotfuchs and it is truly a low maintenance garden.
The water garden which was not discovered until 2 years into the clearance, now shows a clay lined pond, with a decked walkway along one side leading to an arbour covered with white Wisteria, all of which was constructed from timber found on site. A spring feeds the stream which splits and meanders down to the pond and is flanked with skunk cabbage primulas and hostas.
There is a small Japanese inspired garden outside Fionaâ€™s bedroom with dark green stained trellis adorned with climbers such as Akebia, Bignonia Clematis and Schizophragma giving a little privacy there. A deer scarer water feature sits amongst the Acers, ferns and Cercis canadensis â€œForest Pansyâ€.
A gravel entrance garden greets the visitors arriving at the garden and nursery area. A dry stream meanders through the planting which has contrasting leaf colour, shapes and textures in the shrubs and swathes of stunning bulbs for stunning visual impact at all times of year. A slate water feature amongst Zantedeschias, Phormium â€˜Platts Blackâ€™ and Imperata cylindrical Rubra gives structure and interest right through the winter. There is always something rare or stunning in this area to see or smell, such as Chimonanthus praecox lutea in February, Camellias in March, Gladiolus tristis in April, huge Alliums in May, Gladiolus papilo Ruby and Watsonias in July, huge flowered Agapanthus in August, and then the fiery colours of the Acers, Cercidiphyllum, Nandinas all through the autumn.
The woodland gardens have been developed in several phases. The first area to be opened up is to the south of the main garden and here there are woodland beds packed with Acers, Camellias, Hamamelis, Lilies, ferns, Hostas Epimediums, Hellebores, Aconitum, and a host of spring flowering treasures such as Trilliums, Erythroniums, Paris, and many more all appearing before the tree canopy takes all the moisture from the soil. A Liquidamber walk has been planted along with many other trees for Autumn colour, such as Parrotia persica, Nyssas, Azaleas, Stewartias and Cornus. The spring is not to be missed with the carpets of snowdrops in February and the bluebells in May amongst the Azaleas and birch trees
The final and largest area of woodland was developed from 2007-2009 and opened to the public in 2009. Over 1000 sycamores were felled and killed; acres of brambles brought under control, an original pond lined, and thousands of trees planted for the next generation. A base of oaks, and hornbeams set off the Acers, Nyssas, Azaleas, Amelanchiers, and other trees for Autumn colour. Rhododendrons, Magnolias, holly and Camellias have been planted for evergreen structure and winter colour. There are many very rare and hard to source varieties of trees and shrubs, such as 4 varieties of Pawlonia, 5 of Stewartia, 150 different Camellias, and in many ways this is the most exciting area of the garden. There is a childrenâ€™s area with a fantasy shipwrecked pirate boat washed up on a tropical island with tree ferns, and large leaved exotic plants, with a childrenâ€™s size tropical hut constructed from fallen chestnut found on site. A second building gives a welcome resting place in the Northern corner of the property where 30 of the original oaks remain and are inhabited by woodpeckers and Owls, an ideal spot to sit and do a spot of bird watching.
In conclusion this is really a garden for all seasons, - â€œA Plantsmanâ€™s Paradiseâ€ with unusual specimins to be found at all times of the year. 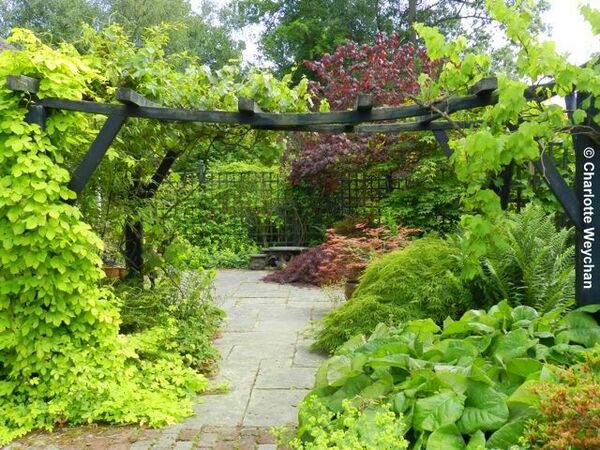 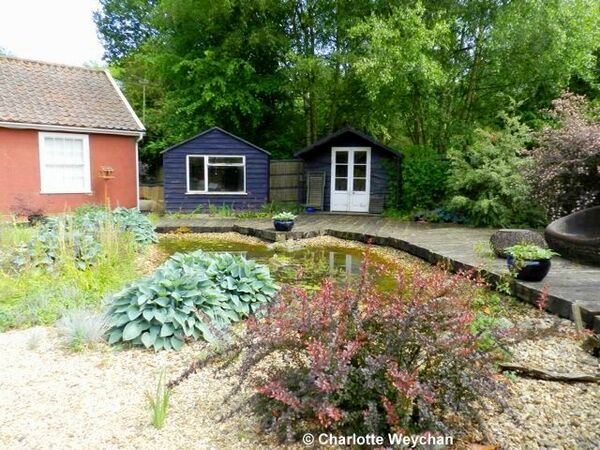 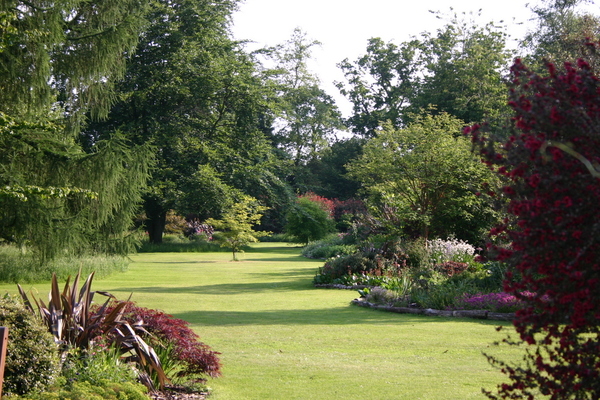 Green Island was originally part of the land that belonged to Ardleigh Park opposite and owned by Miss Winnifred Elin. In 1958 she sold the big house and a bungalow- Green Island was built for herself. The garden she created consisted mostly of orchard,two shrub beds and a vegetable patch. Meetings of the anthroposophical society were held within the seclusion and secrecy of the woodland and two timber chalets were built for her visiting "artist friends". When Miss Elin died Green Island was inherited by Cissy Parker who lived there with her husband Claude until its sale in 1996. That was when Fiona Edmond and her husband Andy bought Green Island and despite being seriously ill with M.E. Fiona, a professional garden designer started to develop the gardens. The first phase involved the terrace, japanese garden and first six island beds. In 1999 the gardens wetre opened for the first time and spurred on by the overwhelming response of the public the second phase of development was undertaken involving the water gardens, seaside garden and a further eight island beds (six of which are more woodland in style). The gardens began opening regularly for the NGS and later as a commercial enterprise. The nursery grew alongside the garden. Clearing of the woodland beyond the woodland beds was the third stage of development. The area was planted with spring woodlanders amongst the Acers Camellias, Liquidambers,Stewartias and Hamamelis and meant that all the land to the south of the garden had been tamed, and Fiona's ambition to rid Green Island of the dreaded sycamores that had invaded since the 1987 hurricane became a possibility.
The final stage involved clearing 10 acres the other side of the property. Thiousands of sycamore trees and saplings were felled,and killed, woodland paths created and carpets of bluebells unseen for a generation were revealed. The woodland is now packed with Azaleas, Camellias, Rhododendroms, Hamamelis, Magnolias, Nyssas, Acers and Styrax with many other trees and shrubs for Autumn colour.
The whole "island" is now open to the public and the "History of Green Island" is only just beginning. With the maturing of all the rare and unusual specimins that Fiona has planted it can only get better each year.