A sweet renaissance castle-garden in the foothills of the Scottish highlands. It was made by Sir David Lindsey, to give protection in the medieval manner whilst educating his children in the renaissance manner. The square garden, probably made in 1604, is enclosed by massive but well-proportioned red sandstone walls with carvings of the planetary deities. Alternating niches may have been used for flowers or for birds.  Just as the family dreamt of science, art and the planets, we can dream of the life they lived. The Edzell garden is charming but nothing is known of the original planting and the current 'Scots parterre', made in the 1960s is as fanciful as it is misleading. It was designed by Dr James A Richardson LL.D HRSA. He also designed the National Trust garden at Pitmedden.

Note by TT on the Edzell planting: the possibilities for the planting of the central area include (1) it was a medieval  'flowery mead' (2) it was a flowery mead planted with connoisseur's fruit trees (3) it was, in the manner of Italian renaissance compartimenti, planted with herbs and flowers with an internal pattern of paths contained by a planted fence, or hedge (of clipped or unclipped lavender, sage, rosemary etc) - as shown in the books of Serlio, who lived 1475-1554.Since David Lindsey had visited Holand, and the plaques at Edzell are believed to have been inspired by Dutch paintings, it seems likely that the rest of the garden was also inspired by a Dutch precedent, in which case '(2)' and '(3)' are more probable than '(1)'. And since there was another orchard space at Edzell, '(3)' seems the highest probability. To re-create such a design would make Edzell a far more interesting place than it is today. One cannot blame the good Dr Richardson for what he did but much more is now known about garden history and there is a good case for installing another hypothesis at Edzell. 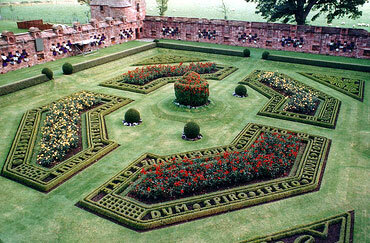 All year. Daily except Thursdays and Fridays from November to March.