Shiraz, at an altitude of 1490m and in a fertile valley. It became a very important medieval Islamic city, famous for its Persian gardens and fine wines. The garden has fallen further into decay since Gothein's photograph was taken in the 1900s. It is known as the Garden of the Throne or the Garden of the Level. The Bagh-i-Takht is thought to date from c1100 AD. It had seven planted terraces with a dwelling on the top terrace. Water descended from the top to the rectangular lake below the lowest terrace. The approximate location is shown on the map.

Donald Newton Wilbur wrote (in Persian gardens and pavilions, 2nd edn 1979, p82): 'Clearly visible from the presumed site of the Bagh-i-Naw is the crumbling complex known today as the Bagh-i-Takht, or Gardens of the Throne. Some hundreds of meters to the west, it abuts a rocky hillside and owes its existence to the presence of a spring which gushes from the rock. An early history of Shiraz indicates that a local ruler of the eleventh century, Atabek Qaracheh, was responsible for constructing a garden at the spot.' 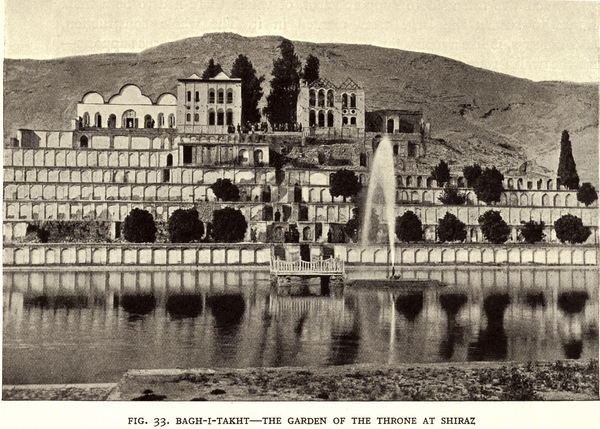