The old site of Samarkand was occupied c 500 BC to 1220 AD. It was on high ground, for defensive reasons, and is therefore arid. There is a river valley to the north and there was a large fertile plain to the south (now the site of Samarkand). Timur Tamerlane's citadel was on Afrasiyab but he spent his time moving between residential orchard gardens in the fertile oasis land around Afrasiyab. They were places to relax with one's wives, beside irrigation streams and in the cool shade of luscious fruit trees. In the Sogdian language, Samarkand means 'Stone Fort' or 'Rock Town'. James Elroy Flecker wrote that:

We travel not for trafficking alone;

By hotter winds our hearts are fanned:

For lust of knowing what should not be known

We take the Golden Road to Samarkand.

Fragments of one of Timur's gardens survives by the Ak Sarai. 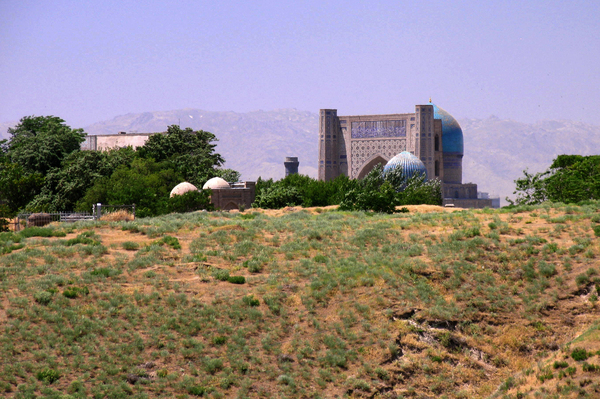