Bring back the street.

"Bring back the street"

In the eighteenth and early-nineteenth centuries, towns were developed by laying out streets and then allocating building plots to developers [Fig 10.25]. This was done with Craig's plan for Edinburgh New Town, Nash's plan for Regent's Park, and William Light's plan for Adelaide. Nash also designed the elevation of the buildings beside Regent's Park ï¾­ but not the internal house plans. In each of these examples the public streets and squares were designed before the architecture. This method of town development has been largely forgotten, because roads are seen as 'transport infrastructure' instead of 'public open space'. The design of streets, fronted by coherent architecture, could still be used in town expansion and new town schemes. Aesthetic criteria should be developed for the layout of minor roads, footpaths, cycleways and parks before the buildings are designed. To some extent this is done in business parks and related developments. A considerable advantage of applying the principle to town development is that it enables land uses, and buildings of different ages, to be intermixed. Developers can come forward with proposals for single houses, groups of houses, workshops, offices, bars, schools, shops and other land uses. 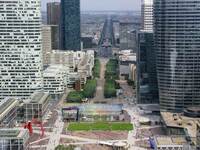