Transport modes have to be integrated, with each other and with the environment. Cities need experts in planning for each transport mode (train, car, bus, cycle, pedestrian, horse, skates etc) and experts in the integration of transport modes. When it comes to integration, there are bound to be conflicts. Experts can go some way towards their resolution, but they must take advice from user groups, democratic bodies and landscape planners. Transport modes have flexibility in different degrees. Trains run in straight lines and need high passenger volumes if they are to be economic. In a high density city, like Hong Kong, this is no problem. In medium and low density cities, stations must be planned to attract passengers who arrive by walking, bicycle, bus and private car. Roads have more flexibility in their planning, than do railway lines, but they too are expensive structures. Pedestrians and cyclists can make do with cheaper pathways and more diversions, but any inconveniences inflicted upon self-powered travellers will persuade them to use mechanised transport instead. In town development, transport planning requires an evolutionary approach. One could start by making two-lane roads with sidewalks, which differ from 'ordinary' roadways in four respects: The pedestrian surfacing should be of best quality natural stone or hard clay bricks, so that it will last for ages. The two vehicular lanes should each be 5m wide, instead of the standard 3.6m, so that they can accommodate cyclists and buses. The vehicular surfacing should discourage vehicles from travelling above 60 km/hr. Roadways should be designed according to aesthetic and environmental criteria, as well as vehicle-flow criteria. Such a road can evolve. In the short term, it can be used like a standard road. In the medium term, it can become a 'mostly pedestrian' street with a path for busses, taxis and cyclists. In the long term, if it turns out to be a nodal space, it could become a pedestrian-only shopping mall with delivery vehicles permitted only before opening hours. Or it could become a feeder mall to a covered shopping centre. Or it could become a high-density residential street, fronted by town houses. Or it could become the central mall of a business park. This is how the old streets of Italy and Spain evolved. Providing only that the street is well-made, it will have a future value as durable as that of an antique table. Towns are bound to change but should always be of good quality. 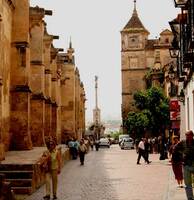 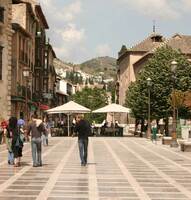