'Traffic calming' is a bad name for a good idea.

Outside town centres, it is also necessary to place limits on the free flow of vehicles. But they should not be vindictive [Fig 10.22]. We are all pedestrians and we are all vehicle-users. The policy of 'traffic calming' derives from Jane Jacobs observation that the objective of transport planning should be the attrition of cars by cities. The typical weapons of attrition are speed humps, chicanes, width restrictions and diversions. All are designed to 'calm' vehicles - though their effect on drivers, cyclists, horse riders and others is quite opposite: they need sedation. Chicanery is not calming. One of the earliest schemes, in Cologne, was planned well and has matured well [Fig 10.23]. There is a pleasant irony to the current discussion of traffic calming. After a century of designing roads exclusively to facilitate traffic movement, vehicles have become over-excited and needs must be calmed. The danger is of traffic calming being treated, once again, as a bald engineering exercise. Vehicular traffic is but one consideration: thought must be given to many other issues. When my local municipality embarked on a traffic calming programme, I wrote to ask for a copy of their policy document. They sent me a construction detail for a speed hump with a note on the spacing interval required by the Department of Transport. Like the mumps, they have been burst out everywhere, causing pain to travellers and disrupting both visual and wheeled harmony. Traffic calming measures should be treated as an exercise in environmental design [Fig 10.24]. Any structures which are built must also serve other purposes: car parking, bus shelters, childrens' play, spatial enclosure, public art, climatic improvement, cycle routes, street lighting, urban forestry. Carmen Hass-Klau has made a comparative study of traffic calming in Britain and Germany (Hass-Klau 1990: 212). Both countries were influenced by the Buchannan Report of 1963. Colin Buchanan was a multi-disciplinary person (architect, planner and engineer) with an unusually broad view of transport planning. He recommended the idea of pedestrian precincts and, to make them possible, proposed the construction of new roads (Buchanan, 1963). His report was read by a British Minister of Transport, who just happened to head a major construction company, primarily as an argument for building new roads. In Germany, where the need for new roads had never been doubted, the Buchannan Report was read as a case for making environmental areas in which pedestrians could walk and shop without being harassed by vehicular traffic. Buchannan was regarded, in Germany, as the father of traffic calming. At first, 'Although there were many urban planners who wanted more pedestrianisation, they were opposed by hard-core traffic engineers who were of the opinion that without motor traffic the traffic-free areas would become slums' (Hass-Klau 1990). Munich's city centre was pedestrianised in 1972, in preparation for the Olympic Games. Concrete slabs and planters were used, but they were later replaced with natural stone slabs. The scheme has been a notable success and gave great impetus to other schemes. An early lesson was that if calming measures are installed in one street then traffic will switch to the nearest adjoining street. This makes it essential to have an area-wide traffic calming policy. Another criticism of German calming schemes was that 'when you have seen one pedestrian area you have seen them all'. Uniformity destroys the character of historic cities and makes new urban areas as homogeneous as multiple retail shops. Nor should pedestrian zones be planned as islands in a sea of traffic. There must be an overall pedestrian network which is at least as comprehensive as the vehicular network. Britain also became disenchanted with motor traffic in the 1970s, but did not adopt any alternative transport policy. Traffic calming did not become popular until c1990 and, in Hass-Klau's view, British towns then set about making the mistakes which German towns had made in the 1970s. Individual schemes were launched without 'an area-wide concept which has also to include major roads, public transport, cycle facilities and other car-restraining policies'. Uniform design details were adopted, no comprehensive pedestrian networks were planned and no post-construction studies were initiated. 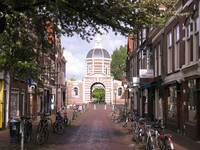