April and early May is the time of Primroses. The wild Primrose, with its rare colouring of a pale yellow that may well be called cool, for it has a greenish quality, is much the best for wild planting, for not only does it look more suitable, but the garden kinds of stouter build and stronger colouring demand regular garden cultivation. It is best to have these in a place of their ownï¿½some place that is partly shaded, such as a spacious clearing in a grove of Oaks, where they can be grown in thousands, and where they can have a further irregular shading of hazels or garden nuts. When space allows, a sort of sequence of Primrose gardens would be desirable, for the true Primroses, with all radical stems, are the first to flower, to be followed by the larger growing bunch kinds. Even these, for the sake of colour effect, should be divided into two or even three sections; one for the rich and dark colours, red, crimson, and brownish, with a few only of the deeper yellows; one for the yellows and whites, robust plants of fine effect; and a smaller section for those whose colour is a tender mauve or pinkish or light purple shade, with whites. This might include the fine old double mauve and double white, now comparatively rare, but these only do well on a strong loam or a chalky soil. There are a number of small early bulbous plants, such as Scillas and Chionodoxas, that are best used in a place by themselves; they look well carpeted with low-growing things, such as the mossy or the encrusted Saxifrages. The front of a flower border with a rocky edge is a good place for them; they can be planted just behind the stones, with the Saxifrages creeping between the stones and partly between the little flowers; or if there is a bank or border for hardy Ferns, the small plants may well run up in streams or drifts between the Ferns, whose later growth will completely cover them and fill the border. With April the spring flowers come crowding in. Planted dry walls and rock gardens this month and next are full of bloom, and hosts of bulbous plants are in flower. Iberis, Aubrietia, Arabis, Alyssum, and Myosotis are some of the most conspicuous of the lower-growing plants. They are often placed all together, but it is better to avoid the garish contrast of purple Aubrietia and yellow Alyssum, keeping the Aubrietia only in company with the white flowers. Aubrietia is one of the flowers that has of late suffered by the perversion of its proper colouring in the direction of reddish tones. These are bad reds at the best, with the sole exception of a rather pretty one of a pale pinkish tint. The proper colour of Aubrietia is a clear, rather light purple, such as one may get by choosing the best of the produce of a packet of seed of Aubrietia graeca. There are some fine things of deeper colouring, of which the best is a well-known kind named from its raiser Dr. Mules. The finest effect of a group of Aubrietia is when it is composed of more than three-quarters of the normal pale colour, with a few plants only of Dr. Mules, in a setting of the pure white bloom and deep green foliage of Iberis sempervirens. There is a beautiful variety called Lavender in which the bloom is large and of a good colour, but the flowers are not so numerous as in those that are nearer the typical graeca. Myosotis is delightful with anything white or pale yellow, such as Primroses or white Tulips, the clear yellow Tulipa retroflexa, pale Daffodils, and the palest Wallflowers. Such an arrangement may well have a back planting of the purple-leaved Sage. There are several varieties of Myosotis, and many may be tempted by the stronger blue of some of the newer kinds, but the best for general use is M. dissitiflora. The dark Wallflowers, known as blood-red, are fine with the tall scarlet Tulipa Gesneriana, and the colour effect .is all the better for a groundwork of the satinleaf, Heuchera Richardsonii; shorter red Tulips come in front of this, and quite at the edge the reddish-leaved Ajuga. Such a groundwork of related but quieter colour with brilliant flowers is a most important matter in good gardening; and in spring and summer effects this Heuchera, with its ruddy-tinted, satin-lustred leaves, and the purple-leaved Sage above mentioned, are of the greatest use. The Sage, whose leaves have a soft suffusion of pinkish purple, is an excellent setting to anything pink, such as the fine Tulip Clara Butt. 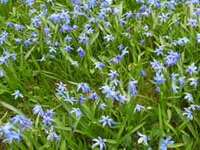