15, Basins of water for aquatics. 16, Rustic building, of which a view is shown in Fig. 16. In the interior is an alto-relievo of statuary marble, representing a female over a funeral vase, surrounded by a sort of broad frame of corals, cornua Ammonis, and large mineral specimens of different kinds. 17, Groups of roses, dahlias, and other ornamental flowers. 18, Two semicircular beds of roses. 19, A covered double seat, one half looking towards the roses and the other in the opposite direction. In the latter are kept the instruments for playing at what is called lawn billiards, which is said to be a game intermediate between bowls and common billiards. This game is little known, but materials for playing at it are sold by Messrs. Cato & Son, wire-workers, Holborn Hill, London, who sent out with them the following printed rules:- "This game, which differs from all others, should be played on a lawn about twelve yards square; the socket with the ring being fixed in the centre by a block of wood fixed into the earth. It may be played by two or four persons, either separately, or as partners, each player having a ball with a cue pointed to correspond. Care must be taken to fix the ring at the end of the cue close to the ball before striking." 20, The pond. On the margin of which, at k, is the boat-house seen in Fig. 17, in p. 517. 21, Descending steps through evergreens, from which is seen the distant view of the house and the tent, as in Fig. 10, in p. 507. 22, Dahlia plantation. 23, Chinese temple, from the interior of which is obtained the view shown in Fig. 9, in p. 504. Behind the temple, a little to one side, is the grotto shown at 91 in the plan, Fig. 6, in pp. 494, 495, and also in the view, Fig. 11, in p. 508. 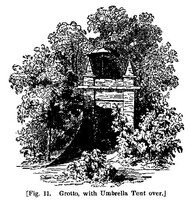 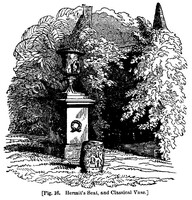