Fig. 13, in pp. 510, 511, is a vertical profile of the gardens and pleasure ground, with the farmyard, and a small portion of the farm. This view shows:- 1, The house. 2, The domestic offices and yard. 3, Vinery in a small garden. 4, Back entrance to the domestic offices, and the smaller kitchen garden. On one side of this walk is placed one of Fuller's portable ice-boxes. 5, The smaller kitchen-garden. 6, Broad border for pits; and in which there is a cold pit for protecting vegetables during winter. 7, Boundary plantation. 8, Angular brick wall, for the sake of having different aspects for the fruit trees which are trained against it; and for strength, being only one brick in thickness for lessening the expense. 9, Pond in the largest kitchen garden, supplied from the brook by pipes with waste pipe to the pond on the lawn. 10, Filbert plantation. 11, Orchard and boundary plantation. 12, Covered seat, of which a view is shown in Fig. 12. In front of this seat there is a mulberry tree of large dimensions, which was transplanted by Mr. Harrison, when it was upwards of 80 years of age. The instruments with which a number of large plants, particularly shrubs, were transplanted under Mr. Harrison's direction, when the grounds were being altered and enlarged, were described for us by Mr. Pratt. (See Gardener's Magazine, vol. xi. p. 134.) Mr. Pratt kept for many years large plants which had suffered from many causes, or which were not immediately wanted, in what he called an hospital for these purposes. 13, A flower garden, in which for several years a large Araucaria brasiliensis stood out in the centre bed; but it was killed to the ground in the winter of 1837-8. 14, The rustic covered seat, shown in Fig 14, in p. 513, and of which Fig. 15 is an elevation of the back, showing the manner in which the barked poles are arranged. 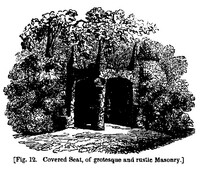