Work on the garden began in 1701, inspired by Landegrave Karl's visit to the Baroque garden of Villa Aldobrandini, in Italy. Only the upper third of the late-Baroque design for Wilhelmshohe was completed, on a steep section of the hill. One might describe its scale as Titanic, Herculean or Wagnerian. Herculean must be the adjective of choice, since a huge bronze copy of the Farnese Hercules is placed at the highpoint of the central axis. He stands on an octagonal castle, the Wasserchloss, which houses the water tank. Occasionally, the contents are released into the cascade. A Chinese village with a pagoda, known as Mulang, was added at the end of the eighteenth century, under the influence of English romanticism. In the early ninteenth century the Bergpark was finalised by Landgrave Whilhelm IX, making it into a heroic landscape park. The Baroque cascade, like its nephew at Chatsworth, had a similar fate. Whilhelm IX's additions included an Aqueduct and a large medieval castle, the Lowenburg, built as a mouldering ruin. Today, the Bergpark can be seen as a product of German romanticism, applied to the art of garden design. Crowds gather to view the cascade on those occasions when it operates. Water crashes down the great cascade along the central axis. It then diverts to flow through two romantic waterfalls. The axis runs through the Schloss, down the hill and along a 5 km road into the centre of Kassel. The Bergpark is vast and irregular. 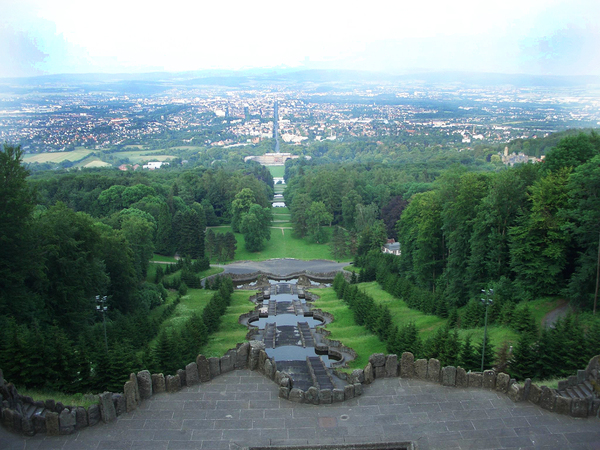