The site of the ancient games has been excavated, revealing the layout and the Doric columns that supported the main structures. Olympia lies amongst low wooded hills and near two rivers, the Alpheus and Kladeos, which have changed their course. There was no town nearby. The Olympic games were part of a religious festival held every four years from the 8th to the 4th century BC. The oldest remains at Olympia date from the 2000 BC, when it was a sacred grove. Religious rites took place in a walled compound, known as the Altis or 'sacred grove of Zeus.' It contained the Temples of Zeus and Hera, the Alter of Zeus, and the Prytaneum with its perpetual fire and great fountain. The inner Sanctuary of Peolps was a walled garden with trees and statues. Phidias, one of the world's greatest sculptors, had his workshop at Olympia. A covered entrance used by athletes led from the Altis to the oldest Stadium in Greece. The Olympic Games were famed throughout the Hellenic world. Spectators sat on massive earth embankments, which survive. Only men and unmarried girls were allowed to watch. Horse races took place in the hippodrome, south of the stadium. The Romans continued to use the Olympic site for games after their conquest of Greece in 146 BC. Nero built a small palace between the stadium and the hippodrome. Athletic facilities, sculptures and baths became features of Roman gardens. Visitors may find it interesting to reflect on the comparison between Olympia, modern sports stadia and the park made at Munich for the 1972 Olympic Games (see page...). Great sportsparks, from either the 5th century BC or the 20th century AD, demonstrate that sport can stimulate the mind as well as the body. [Note: the modern series of Olympic Games began in 1896].

The Temple of Hera Dino 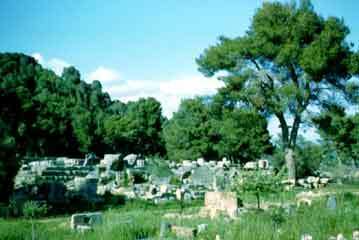 All year, Daily, Open 8am to 7pm or dusk