The famous St Gall Plan is 'utopian' in the sense that no large monastery was planned in the Reichenau-St Gall area at that time. It survived, as a copy, in a Life of St Martin in the St Gall library and was drawn, by Abbot Haito or Reichenau (763-836) for Abbot Gozbert of St Gall. [Gozbert was abbot from 816-36. St Gall himself was an Irish monk who lived from 550-645, a desciple of St Columban who travelled to France and Italy and then set up a hermitage at St Gallen in Switzerland which retained close links with Ireland.] Haito, builder of the church at Reichenau and of Basle Cathedral, shows a church building on the St Gall plan which resembles that of Cologne Cathedral, then in construction. Haito had been an ambassador to Constantinople and Walafried Strabo, author of the most famous garden poem of the Early Middle Ages, was one of his pupils. There is no doubting Haito's passion for architecture and gardens. At the age of 56 he resigned as abbot, to live in in simple conformity with St Benedict's rule. A love of regularity pervades his plan. The cloister is exactly 100 feet square and the placing of columns, arcades and buttresses displays great regularity and exact symmetry. The monastery was planned according to a 40:40 module and used the Golden Rule proportions. It reveals a spiritual approach that sought a religious symbolism in numbers. Haito saw the plan as a Augustinian Form, or Idea, for a monastery. In sending the plan to Gozbert, he asked him to 'dwell upon it in spirit. . . we drew it through the love of God out of fraternal affection, for you to study only' . It reveals the square cloister plan to have been based on Neoplatonic aesthetic theory. The St Gall plan also contains the most famous monastic garden details of the Early Middle Ages. They include an Infirmary Garden, a Cemetery Garden and a gardener's house. There are two semi-circular 'paradise' spaces at the east and west ends of the church, confirming the influence of eastern churches on the plan. The word 'entered Christian Church history as the name for the porticoes adjoining the oldest Byzantine basilicas, planted as gardens' (McLean, T., Medieval English Gardens, p. 16). 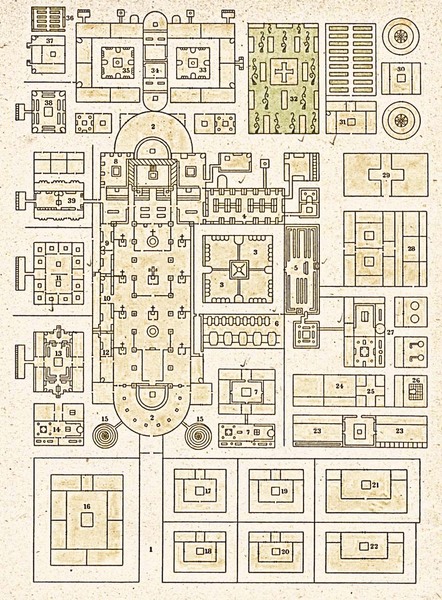