A Russian baroque garden, inspired by Versailles and designed by a pupil of Le Notre (Jean-Baptiste Le Blond). Peter the Great admired Versailles. For his own summer palace he chose a site with a good water supply. It stands on a natural terrace overlooking the Baltic. A fabulous marble cascade flows from the palace towards the sea, along the Samson canal. It symbolises Russia's conquest of the Baltic coast in the Great Northern War. The cascade is lined with gilded statues and leads to a basin with a gilded statue of Samson. On the south front of the palace there is a large parterre, allees, grass plots, basins, fountains and statues. This garden, like St Peterburg itself, is an amazing symbol of Peter's desire to make Russia a sophisticated European power. It contains 173 fountains. They line the canal and ornament the woods. Apart from the unintended symbolism of a poor country pouring water and gold into a northern ocean, and Samson's treatment of the lion, one can read little of Peter's barbaric personality, drunkeness or fondness for torture. Instead, one sees the enlightened side of his character. Petrodvorets was destroyed in the second World War but then rebuilt as a symbol of soviet imperialism. 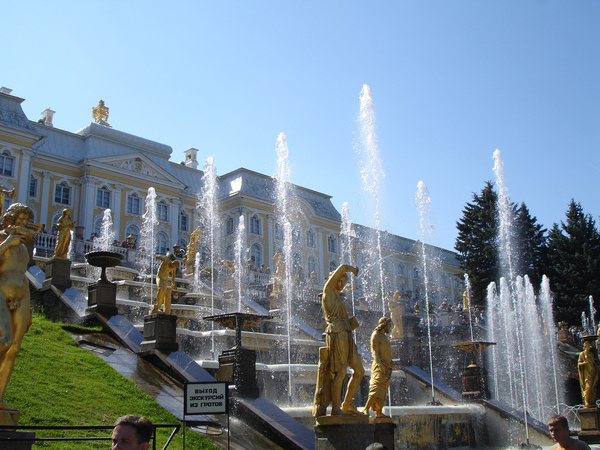