As with most of South Africa's botanic gardens, Lowveld consists of a cultivated garden area (about 25 hectares) surrounded by a larger area of natural vegetation (Sour Lowveld Bushveld). The Crocodile River and Nels River flow through the gardens, creating some spectacular cascades. 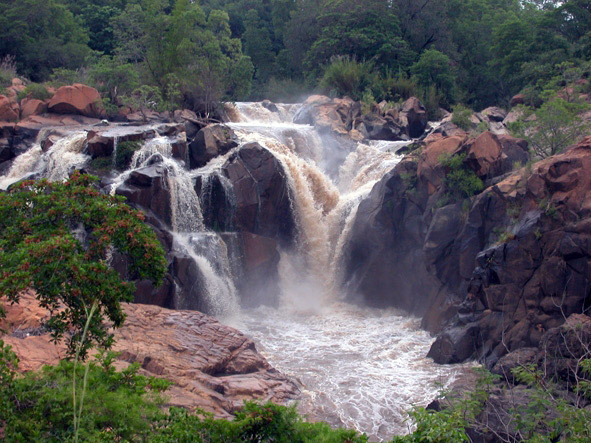 Although the founding fathers selected the site of the Lowveld Garden for its spectacular scenery, abundant plant life and the rivers, these features were probably also appreciated by prehistoric man, Australopithecus, an advanced hominid who roamed this region some three million years ago. He was small-brained and made primitive stone tools from pebbles. About 1.5 million years later he was followed by Homo erectus, a direct predecessor of man, with a larger brain and the capacity for making much more complex stone tools. Although they were also made from pebbles, they had superior cutting edges and were used choppers and cleavers, used for chopping trees, slaughtering animals and digging out roots and tubers. Many of these implements have been found in the Botanical Garden, some of them as large as 10 to 30 cm in length.

Finer and more sophisticated tools bear testimony to the larger brain of Homo sapiens. He also made arrow heads and the rock paintings in areas near the Garden are proof that in those times game was plentiful here. Pottery made by Negroid tribes some 1,500 years ago has also been found in the Garden, along with numerous "querns" or grinding stones.

Most of the Garden has been planted to lawn and flower beds, with paved pathways, but it is, nevertheless, an interesting archaeological site

History
In 1955 the Municipality of Nelspruit decided that the town needed a botanical garden to promote tourism, education and conservation of the diverse flora of the region. Years of patient lobbying and deputising followed. Eventually two adjoining tracts of land were donated by the local Municipality and the Board of HL Hall & Sons. In 1969 the Lowveld Botanic Garden came into being and a botanist and Curator were appointed. The original work consisted mainly of clearing impenetrable bush and creating paths with vistas. Gradually the Garden took shape and finally developed into the botanical jewel that it is today, with thematic and taxonomic areas.

August and September are the spring months. There is nearly always a haze dimming the furthest horizons, but it is part of the spring feeling, the anticipation of the first rains of spring, when the air will become clean and clear again. Everywhere in the Garden there are signs of renewal and exciting plants start pushing up through the soil. In the picture, the snow-white blossoms of the wild pear, Dombeya rotundifolia, herald the advent of the new season as is alluded to in the siSwathi name for the tree, umBikanyaka.
This Garden is noted for its wonderful, massed displays of Clivia miniata, which never fail to delight visitors.
The startlingly scarlet show of the Flame Creeper, Combretum microphyllum, at the guest cottage and the Cascades Café, is a blatant invitation to photographers to record the spectacle.
The Lowveld Chestnut, Sterculia murex, grows only in a few areas in south-eastern Mpumalanga, Swaziland and northern KwaZulu/Natal. It regularly bears, in great abundance, dark yellow, star-shaped blooms
The well-known Sausage Tree, Kigelia africana, a member of the Bignonia family, has large, wine-red, trumpet-shaped flowers that are full of nectar that attract birds and bees from dawn to dusk. The polony-shaped fruits are not of the delicatessen variety and are eaten only by baboons! While still green, the fruit is sliced and applied to skin abrasions and, reputedly, also to skin cancers.