Knole, said to be the largest private house in England, is set in a deer park which was enclosed in 1406, Vita Sackville-West, of Sissinghurst fame, was born here - and was very proud of her ancestry. The oldest part of Knole House dates from the fifteenth century. In the sixteenth century it was bought by the Sackville family. Today, ownership is shared with the National Trust. A famous drawing of Knole, by Kip and Knyff in 1709, shows the house, the walled garden and, in the distance, a deer park. Its a renaissance arrangement. They are little changed in plan but the planting of the walled garden has changed a lot. As shown on the drawing, the main use of the walled garden was to grow fruit and vegetables. Today, it has the character of a dull Victorian garden. The deer-park which surrounds Knole's walled garden is both more beautiful and more interesting. Deer parks were characteristic features of medieval England. They were places to show off the owners' prowess, as huntsmen, and were also valued for the deer and timber they produced. The old uses survive at Knole but the estate also has a subsidiary use as a golf course. It is a regrettable twentieth century intrusion. 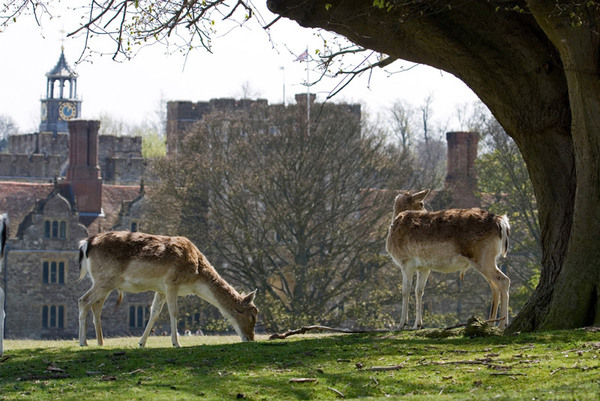