Khirbet al-Mafjar (Qasr Hisham – or Hisham’s Palace) is an Umayyad palace 5 km north of Jericho in the Jordan valley. A mosque, a palace, and a bath house are set within a large enclosure is likely to have been managed as a garden. It is entered by gateway in  outer wall. The courtyard is a square pool or fountain. The audience hall is decorated with a famous mosaic of a lion catching a gazelle in front of a large tree – thus indicating the character and use of the large area of enclosed land outside the courtyard. Andrew Petersen, in the Dictionary of Islamic Architecture  (Routledge 1996 p 96) wrote that Khirbat al Mafjar has 'a large square pool with a central pavilion on columns which would have formed the centerpiece of a garden. .. It is likely that the immediate vicinity of the palace had a garden whilst there was a large walled garden enclosure to the west of the main building'. 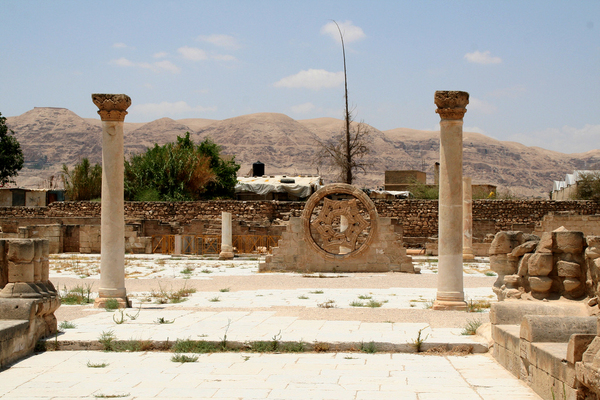