The Jokhang Temple and Monastery is the most sacred and important Buddhist temple in Tibet. It was built during the reign of King Songsten Gampo (605?-650 CE) to celebrate his marriage to a Chinese princess who was a Buddhist.Today it forms part of what UNESCO calls the 'Historic Ensemble of the Potala Palace'.  A walled enclosure in front of the Jokhang Temple is planted with willows. The architectural style was inspired by Buddhist monastaries (viharas) in India. The roof has two golden deer gazing at a Wheel of Dharma.

The Potala Palace stands behind the Jokhang Temple.The site was a meditation retreat until King Songtsen Gampo built a palace in 637. But the present building was started by the Fifth Dalai Lama (Lozang Gyatso) in 1645. It takes its name from a hill in the southern tip of India (Cape Comorin) which is sacred to the bodhisattva of compassion (Avalokitesvara).  The Potala was the residence of the Dalai Lama until it became a museum after the 1959 uprising against the Chinese. 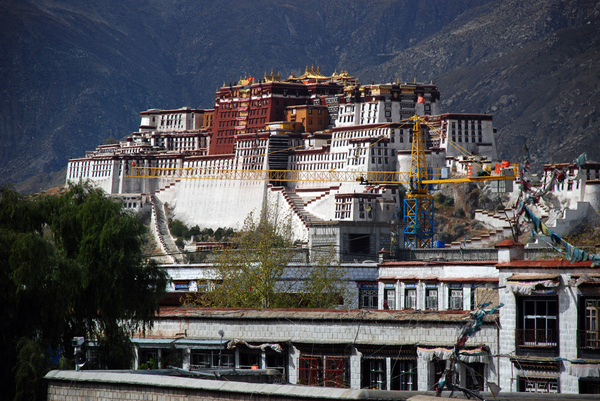 The Jokhang Temple is in front of the Potala Palace in Lhasa, Tibet