The valley where the Rivers Tagus and Jarama meet was a popular resort for rulers of Madrid. A palace was built here in the 1380s. Felipe II (Philip II) employed Dutchmen to make an Italian Renaissance garden in the 1560s. His French wife asked her Italian mother, Catherine de Medici, to send a gardener from Paris. In 1660 Philip IV began a complete transformation of the gardens and Philip V added to his work, making the Baroque garden we see today. French critics, belittling the design as a poor imitation of Le Nôtre, may have ignored the geographical differences between the two countries. France has plentiful water and great forests. Central Spain is dry and rocky, cold in winter and very in summer. To visitors, the narrow avenues might seem ill-proportioned. To residents, they are shady, cool and domestic, quite large enough for a masked ball if not for a great French court spectacular. The Jardin de la Isla is on a man-made island bounded by the River Tagus and the Ria Canal. Sitting on the other side of the Tagus from the Palace, it has Baroque fountains and statues, somewhat overwhelmed by trees. Water and shade are precious in arid regions. The use of baroque garden design ideas to plan the town is a great success. Planting a wood 'on top' of a parterre makes the Jardin de la Isla (Garden of the Island) an unusual feature. The Jardin del Principe (Garden of the Prince) has great walks and a small but interesting nineteenth century 'romantic garden'. Aranjuez had path lined with water jets to amuse and surprise visitors (they are called burladores in Spanish and giochi d'acqua in Italian). 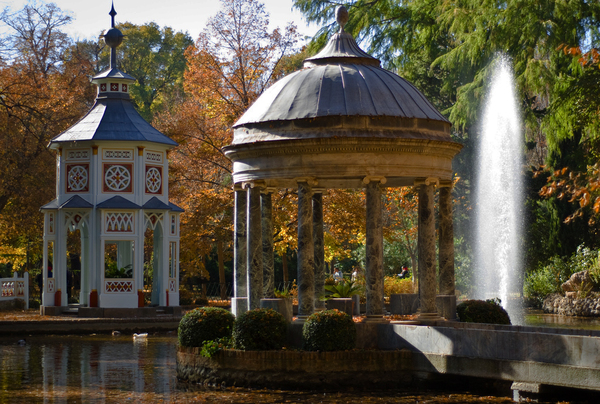 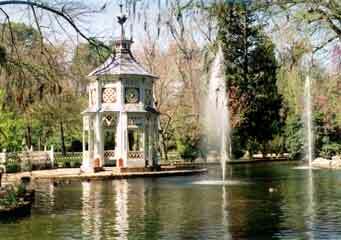 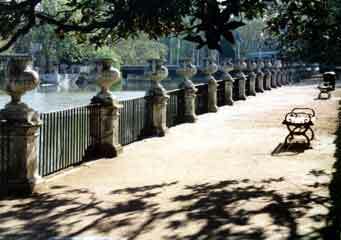