Harold Porter is in the fynbos region (fynbos is Afrikaans for fine bush) and comprises 10 hectares of cultivated fynbos garden and 190 hectares of natural fynbos shrubland vegetation. 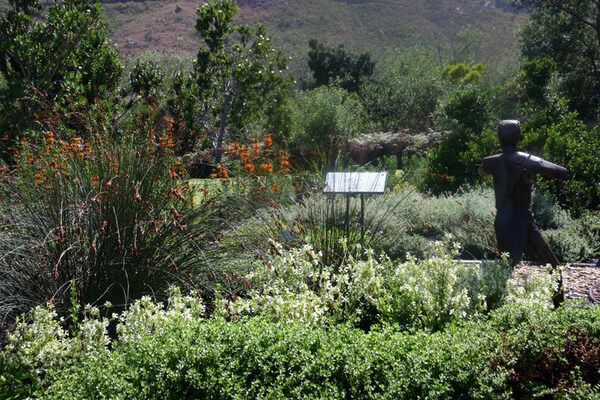 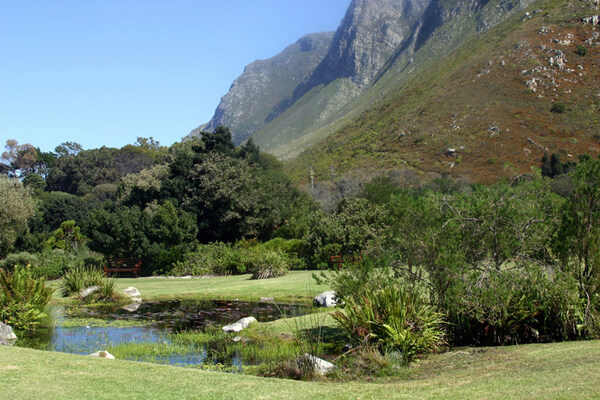 During the 1930's land in the Hangklip area between the Palmiet River and the Rooiels River was acquired by three business partners, Harold Porter, Arthur Youldon and Jack Clarence. They called it the Hangklip Beach Estates and divided the area into three townships, namely Betty's Bay, Pringle Bay and Rooiels and sold off plots to interested parties. Until the Second World War when the coastal road (named Clarence Drive after Jack Clarence) from Gordon's Bay was built to service the radar stations at Stony Point and at Hangklip, the area was accessed via Sir Lowry's Pass and Kleinmond and a pontoon crossing the Palmiet River.

After a fire in 1940 Harold Nixon Porter acquired an extensive tract of land in the Betty's Bay area (named after Youldon's daughter, Betty) by a Trust Agreement to develop as a garden and private nature reserve which he named Shangri-la.This was left to the Shangri-la Nature Reserve Company after his death on 27 February 1958. Finding it difficult to manage from Johannesburg, the Company offered it to the National Botanical Gardens of SA, who renamed it in Harold Porter's honour.

In 1962 the Hangklip Beach Estates added to the garden property by giving it the adjoining area of Disa Kloof and later still, the then Betty's Bay Village Management Board, donated an additional adjoining piece of land which reached almost to the sea. In total the land incorporated into the Harold Porter National Botanical Garden, the most southern Botanical Garden on the African continent, now comprises 200.5ha, stretching from the top of the Kogelberg mountain range to within 10m of the sea, encompassing a whole river system. 10 ha has been cultivated as a garden while the remainder is managed as a natural reserve which is included in the core zone of the Kogelberg Biosphere Reserve, while the developed area forms part of its buffer zone.

The first sod in the garden was turned by Harold Porter on 5 October 1950, watched by his overseer, Mr Veldsman and a labourer. He marked out various pathways in the garden, augmenting the naturally occuring plants with additional special or colourful plants from elsewhere. He also marked out and built the Zigzag path which leads to the top of Bobbejaanskop and is still in use today. Some of the first labourers used in the garden were convicts who helped clear brush and built some of the retaining walls and weirs in Disa Kloof. The garden was officially opened by Harold Porter and Prof Brian Rycroft, then Director of the National Botanical Gardens of SA, on 13 November 1955.

Harold Porter died at the age of 75 on 27 February 1958 and his ashes were scattered in a favourite spot of his where Nerine sarniensis bloom every March. A plaque of granite was sunk into a large sandstone boulder to mark the spot. For a time his wife Olive May, and son Arthur, continued to support the garden and were instrumental in shaping some of the features which can still be seen in the garden. One of these is the entrance building designed by Arthur and built from the stones of their home, Afterglow, which was burned down in a terrible fire in 1960. The pole at one corner of this building was fetched with considerable effort from the beach where it had washed up after very high seas in a massive storm which also swept away some retaining walls at Seapoint. This building was opened on the 23 Sept 1963. A bridge connecting the main garden to Disa Kloof across the Dawidskraal River is named after Olive May Porter and was opened by her on 14 February 1967. Another feature in the garden which owes its existence to Olive May is the Dunes section of the Ecosystems Walk. She died in 1984 at the grand old age of 98 and her ashes were scattered near her husband's memorial stone.

The original paths through the garden as laid out by Harold Porter were simply slashed through the existing vegetation. Slowly these were widened, edged with white painted stones, and covered with gravel to allow for greater and easier access through the gardens. Subsequently some of these paths were widened even further, the gravel was removed and lawns were laid in their place. Each Curator over the years has added to the features and infrastructure of the garden. Ponds were built and streams cleared, all the gravel was removed and now lawn or exposed aggregate paths lead the visitor from one section to another.

As offices, a workshop and storeroom were built, the original office and seedroom of the garden became the toilet block and then changed again and is now the Souvenir Shop and has a little Tearoom next door. A building housing the labourers for the garden similarly changed to a storage facility and then to an Eco-Centre with a Useful Plants Garden where meetings and shows were held. At present some of this building has been converted once more to house the toilet facilities while the new Restaurant and Conference centre are being built.

Fires have occasionally swept through the garden but have fortunately not ever damaged any of the buildings in the garden itself. Garden beds have however been decimated from time to time and much work has been needed to clean up and start again with new plantings in the cultivated areas. However as the natural estate comprises of fynbos, the fires, if they occur at appropriate intervals, are a necessary part of the natural cycle of this vegetation type. The last major fire to sweep through the estate and sections of the cultivated garden was in April 1991. In 2005 an extremely bad storm deposited 220 mm of rain over the garden catchment area resulting in severe flooding which did extensive damage in the garden. With the exception of the damage in Disa Kloof this has all been repaired.

Situated in the centre of the coastal fynbos where the flora is at its richest, the garden encompasses mountain slopes with their wind-clipped heathlands, deep gorges with relict forests, flats and marshes with restios, sedges and bulbs, as well as dunes adjacent to the beach with their specialised salt-adapted plants. The garden is renowned for its waterfalls and amber pools.

The main fynbos families (proteas, ericas and restios) are present as well as other important families such as irises, daisies and orchids. The garden boasts Disa uniflora in its natural habitat (flowering from mid-December to end of January) as well as the national flower, the king protea (Protea cynaroides).