The fortress of Acrocorinth stood, and stands, on a limestone hill 575m above the sea, which is but 5,000 m distant. It commanded the overland route from Northern Greece into the Peloponese and from the Adriatic Sea to the Agean Sea. A Greek and then a Roman town developed on the plain below the hill. This was succeeded by the medieval town which was vacated after an earthquake in 1858. The Greek town has largely disappeared but the Greco-Roman has been excavated. According to Vitruvius, the Corinthian Capital was invented here. For garden historians, the most interesting aspect of the site is the Sacred Well and the Fountain of Peirene. Pausanias (Book 2, 3-2) wrote about the faï¿½ade 'with chambers made like grottoes, from which the water flows into a basin in the open air'. The rectangular basin and the grottoes survive. He also wrote that Peirene 'was a woman who was turned into a spring of water by tears she shed in bewailing her son Kenchrias, whom Artemis had unwittingly killed'. The grottoes were used for drawing water. When the Romans rebuilt Corinth they placed a new faï¿½ade, with doric columns, in front of the Greek faï¿½ade. It was then modified in Byzantine times. 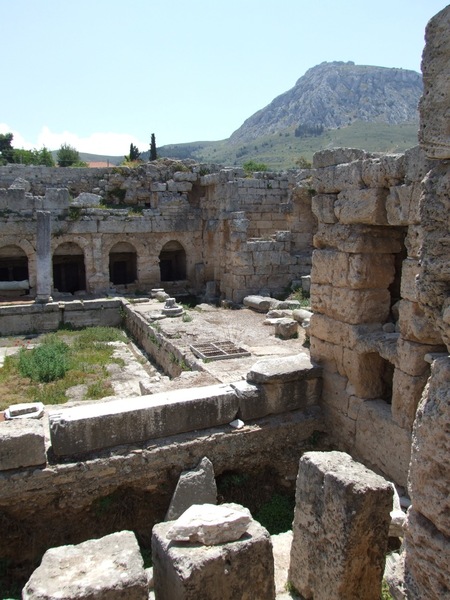 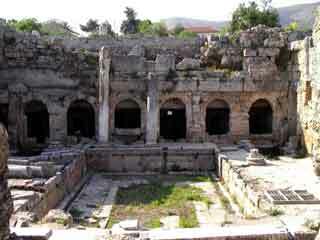 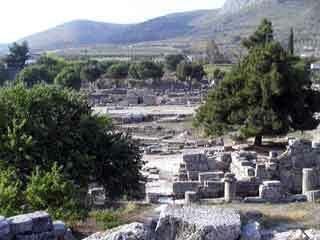