Clairvaux ceased to be a monastery at the time of the French Revolution and was used for a while as a prision. Part of the building survives but not the cloister. This was the great monastery of St Bernard, founder of the Cistercian Order. It is has the classic location of a valley opening to the west and served as a model for later foundations, including Fountains and Rievaulx in England. The Cistercians were founded as an austerely reformed departure from the Benedictine order. They withdrew to lonely marshes and valleys, so that they could be separated from towns. They became the best agronomists, the best stockbreeders, and best foresters and, in all probability, the best gardeners of the later Middle Ages. The Abbey is also famous for the account, by Migne, of the intricate system of water channels within the monastery grounds. The grounds are now being excavated and strictly controlled access is available. 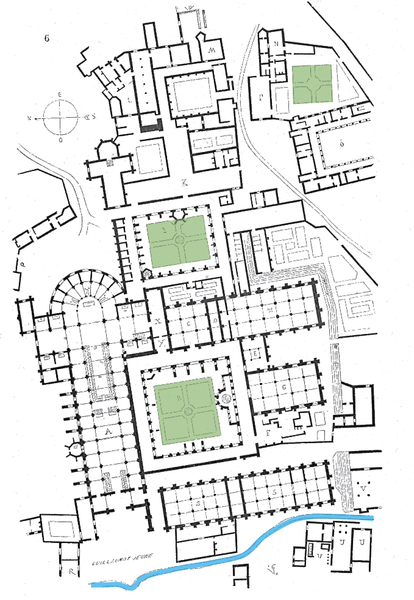