Xianyang, the Qin capital was north of modern city of Xian, on the north bank of the Wei river. Chang'an, now called Xian, was the largest city in Asia and lay south of the Wei river.. Under the Tang Dynasty Chang'an - the 'Constantinople of the East' - with a population of perhaps 2m before the dynasty fell in 907 AD. It was a palace city laid out on a Confucian plan with a north-south axis and a rectangular plan (10 km by 8 km) - Xian retains this street pattern and the central area is walled. The emperor Shih Huang Ti (259 - 209 BC) had a large hunting park (Shang-lin) connected by a covered bridge to the city. His palace (O-fang) had a large courtyard for ceremonial occasions. Another palace and hunting park, the Wei-yang, was made by the Emperor Wu (140-87 BC ). His park included a re-creation of the Islands of the Immortals in the Tai-I Lake [see note on Taoism, Nature and the Isles of the Immortals]. Shaanxi Province, in which Chang'an is set, is the oldest settled region of China, famous for the Army of Terracotta Warriors, the Huaquing hot springs and strolling gardens (used by emperors and their concubines) and Hua Shan (the sacred mountain, loved by painters and poets). 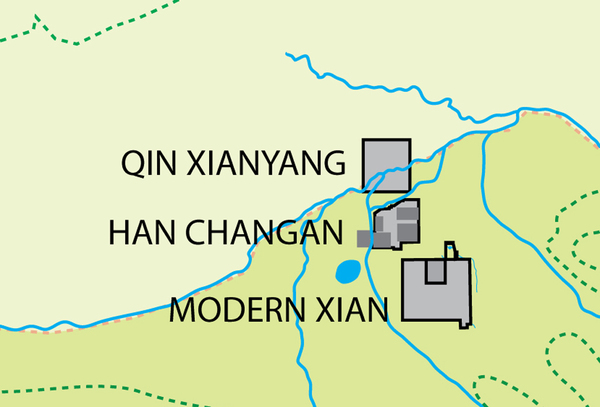