The 'medieval' castle was designed by E.J. Lennox for Sir Henry Pellatt - with electricity and a telephone exchange. The stone for the outer wall came from Scotland and 'casa' is Italian for house. It became known as Pellatt's Folly after his death. The Victorian garden he built was like illustrations of nineteenth century English castle gardens and required a small army of gardeners. The bedding has been partly restored and some new theme gardens have been made in the Casa Loma Gardens.

We invite you to explore the spectacular grounds of Toronto's premier historic landmark, Casa Loma.

The Gardens of Casa Loma portray a wide variety of specialty garden areas in a unique and balanced setting. The formality and elegance of the perennial borders provide a distinct contrast to the vibrant show of spring wildflowers. Artistic displays of annuals find strength in their colour schemes while the many flowering shrubs and trees provide an impressive array of foliage, texture and form. The ever-changing colours of this brilliant floral mosaic allow visitors to enjoy the beauty of the Casa Loma Gardens all season long. 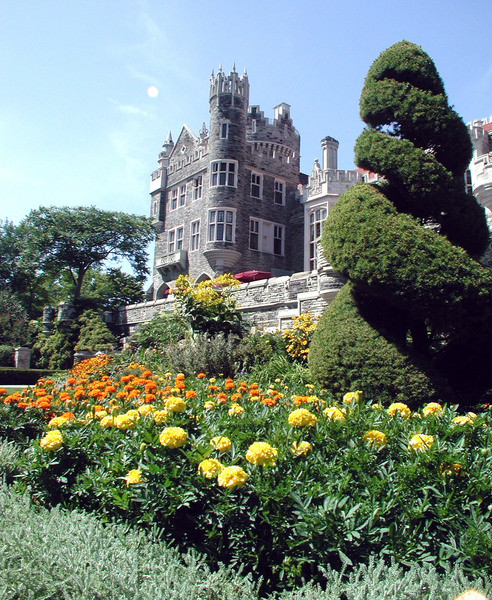 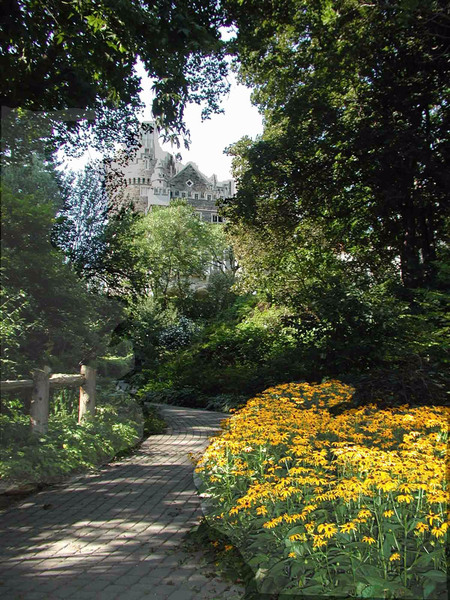 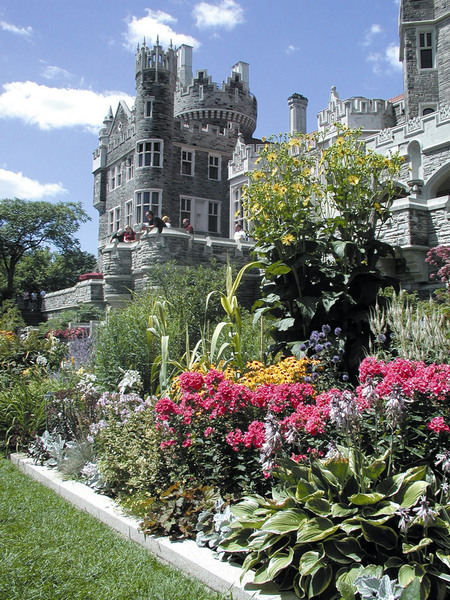 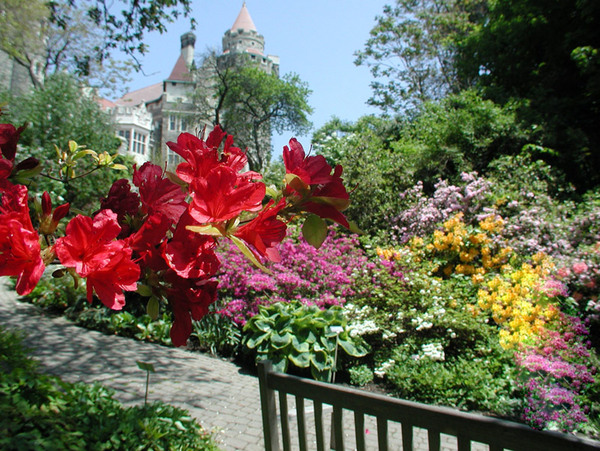 The original Gardens of Casa Loma once occupied a portion of land located on the north side of Austin Terrace. The gardens were modeled after an English Gentlemen's Garden containing a series of parterres with gravel paths, vegetable gardens, flowers and fruit trees. A greenhouse complex featuring a potting shed and conservatory served as a work area for a staff of three gardeners who tended to the magnificent grounds.

Unfortunately, with the demise of Sir Henry's financial resources much of the original land had to be sold and eventually he was forced to leave his dream castle. With the passing of time, the original gardens succumbed to the forces of nature.

The project was not intended to be a historical restoration of the gardens as natural changes in the vegetation of the area made this impossible.

The new garden was designed as a series of specialty garden areas, taking into account specific site conditions. In an effort to retain as much historical significance as possible, certain elements of the original gardens have been incorporated into the new design. For example, Sir Henry's two stone stairways at the east and west ends of the property were rebuilt using the original stone. Also, the original carriageway that winds up the hill from the Davenport Road gates was cleared and converted into a pleasant, shady path.

The renovation of the Gardens at Toronto's historic Casa Loma, undertaken by The Garden Club of Toronto, was a five year project begun in 1987 at a cost of $1.5 million dollars. Funding from The Garden Club of Toronto, The Kiwanis Club of Casa Loma, corporations, foundations, individuals and government created a setting fit for a castle. In 1990, the Gardens were officially opened. Today, the Gardens are operated and maintained by the Casa Loma gardening staff.

Where in downtown Toronto can you see hundreds of roses in bloom from June to October, rare native wildflowers, a dell planted with colourful rhododendrons and azaleas and old-fashioned perennial borders?

All in one magnificent garden at Canada's most famous castle - Casa Loma!

The Casa Loma Gardens consist of over four acres of specialty garden areas on an escarpment overlooking downtown Toronto. The original grounds associated with Casa Loma had been taken over by the forces of nature after Sir Henry Pellatt was forced to leave his dream castle. In 1986, a joint venture between The Garden Club of Toronto, the Kiwanis Club of Casa Loma and the City of Toronto sought to renovate the grounds to their former glory. The $1.5 million dollar project resulted in breathtaking gardens like no other in the city. The Casa Loma Gardens are maintained and funded by the Kiwanis Club of Casa Loma.

If you are starting your own garden or looking for new ideas and techniques, consider a Garden Pass for the garden season. Return throughout the season and explore our spectacular horticultural displays as they reflect the changing colours of the Canadian seasons. A garden pass is $15.00 (including all taxes) and is valid for 10 individual admissions to the Casa Loma Gardens (pass does not include admission to the estate buildings). Bring a friend and enjoy dancing fountains, unusual sculpture and a rainbow of dazzling colour.

•June is the month for roses: we have over 75 varieties of roses. Excellent collection of old fashioned roses, formal beds of floribunda types, Austin Roses; walk through the Rose Arbour into the Secret Garden covered with hardy climbing roses. Don’t miss the Casa Loma Rose on the Lower Terrace.

•Rhododendron Dell: Really at its glory during June; large leafed types in bloom as well as deciduous azaleas; flowering dogwoods, lilacs, mock-orange, spirea are all in bloom now.

•Front Courtyard & Upper Terrace: Containers with annuals should be starting to fill in and showing lots of colour.

•Rest in the cool shade of the maples and enjoy the soothing sounds of the waterfall by our lily pond; pond edge hosts many marginal plants such as ligularia, iris, peltiphyllum, calla, and lobelia; also is the home of our resident turtle, Henry.

•Front Courtyard: roses and annual beds are in their final glory before the first frost.

•Displays of ornamental cabbages with chrysanthemums.

•East Stair: reds and bronzes of oaks and sumacs.