Set on 45 acres of meticulously landscaped grounds, Boscobel, the Federal house museum in Garrison, is set upon a bluff overlooking the Hudson River and the Hudson Highlands. Built in the early 1800s by American Loyalists States and Elizabeth Dyckman, Boscobel was originally located in Montrose. When the house was threatened with demolition in 1955, a group of dedicated preservationists rescued the structure. It was fully restored and opened to the public in 1961. Lila Acheson Wallace, co-founder of The Reader's Digest and benefactor of Boscobel, commissioned the Long Island landscape architectural firm of Innocenti and Webel to provide an appropriate historic setting for the restored house. The formal Rose Garden is designed in a classic English wheel pattern. It has four raised beds surrounding a circular garden with a delightful fountain. Over six hundred rose bushes of 150 varieties are planted including hybrid teas, grandifloras, and old-fashioned English roses. The Herb Garden with its Adjacent Orangerie, is geometrically designed with separate beds for herbs and flowers. The Herb Garden has been maintained by the local garden club since Boscobel's opening. The East Terrace Garden opened in 2004 and is planted with annuals, tropicals, perennials and shrubs. The Woodland Trail was first opened in October 1997. The one-and-a-quarter-mile trail winds through 29 acres of wooded landscape and features spectacular views of the Hudson River. In June 2003, The Ravine Garden opened (designed by landscape architect, Stephan A. Yarabek, ASLA). The plantings used are predominantly native to the Hudson Valley and include dogwood, shadbush, mountain laurel, and sweetshrub. 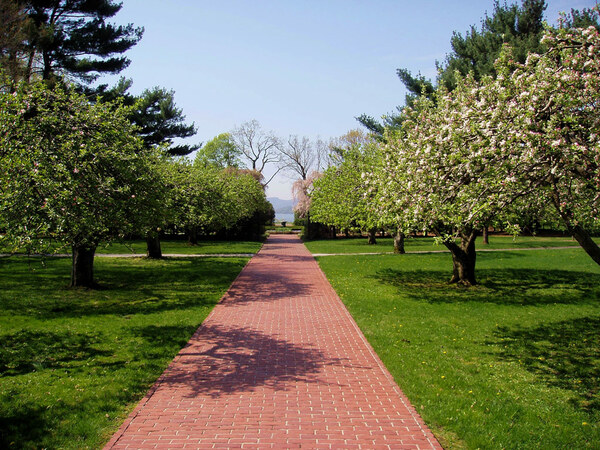 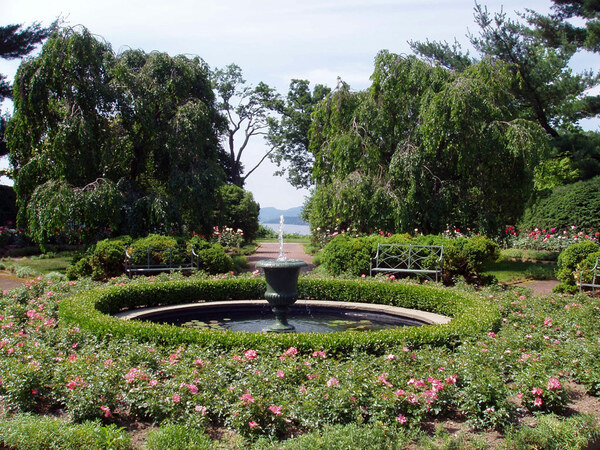 April through December. Wednesday to Monday except Thanksgiving and Christmas. Open 9.30am to 5pm (4pm in November and December).