Borobudur (or Borobudur) is a very large Mahayana Buddhist site in Java. It was a pilgrimage site with elaborate sculpture explaining the path to Nirvana. Nelson Wu described Borobodur as follows: ‘The stupa is in a long, fertile valley, again on top of a small hill, nestling against a protective backdrop of mountains. The whole field is thus the nave of the chaitya; the hill the stupa’s pedestal; and heaven above its arched ceiling. As the mist rises from the foothills of the valley, this enormous monument reveals its volatile silhouette, light as the rising crest of a wave. It has a comfortable curvature, suggesting a basically simple geometric design, and its crushing weight is distributed effortlessly down its slopes, flowing into the supporting natural hill. Its nine levels symbolize the nine levels of the cosmic mountain, Mt. Meru, complete with a subterranean terrace where the enlightened desire to ascend begins. From this underworld of nightmarish experiences, illustrated by the bas-reliefs, the entrapped godly nature of man distinguishes the right path from the wrong. Waiting for him above are the square terraces representing this world, and the circular terraces representing the world of God’. ( Chinese and Indian Architecture Prentice-Hall International: London;  1963). Borobudur was probably begun c 800CE under the Sailendra dynasty in central Java but there are no documentary records. 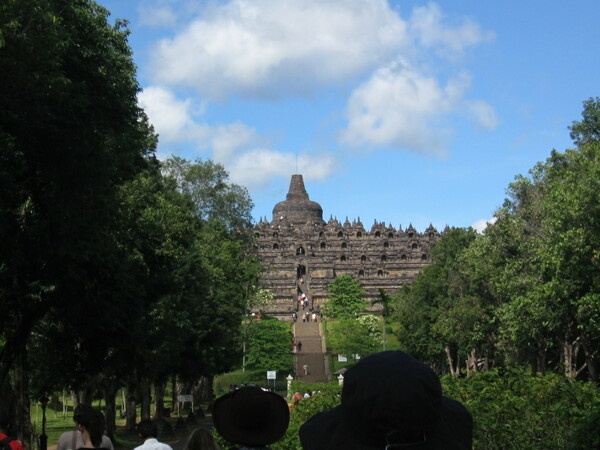 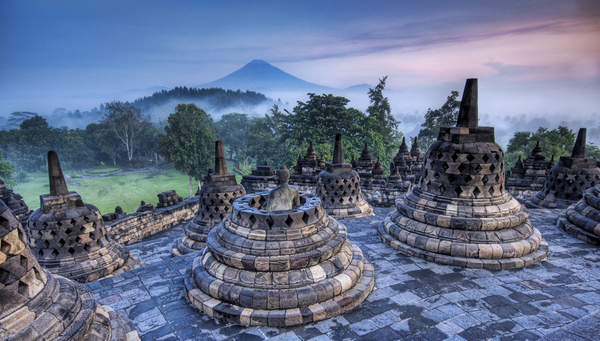