An old estate and garden on the banks of the River Bush. The garden was made between 1800 and 1820. There is a woodland garden and a rose garden.

Within a curved twelve-foot high wall, a garden with herbaceous and mixed borders, a fish pond with fountain, surrounded by rose beds radiating from the pond. Gravel paths and a box parterre and bordered by clipped box. The walls bear many espalier trained apple and pear trees.
The kitchen garden adjoining is well stocked with fruit and vegetables grown in box-edged beds. There is a melon house, tomato house, old stone potting sheds and a gardener's bothy. The area is divided by a central path and an espalier-trained apple alley. 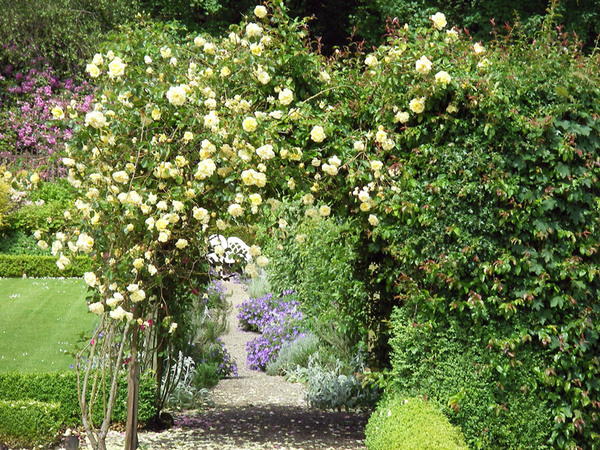 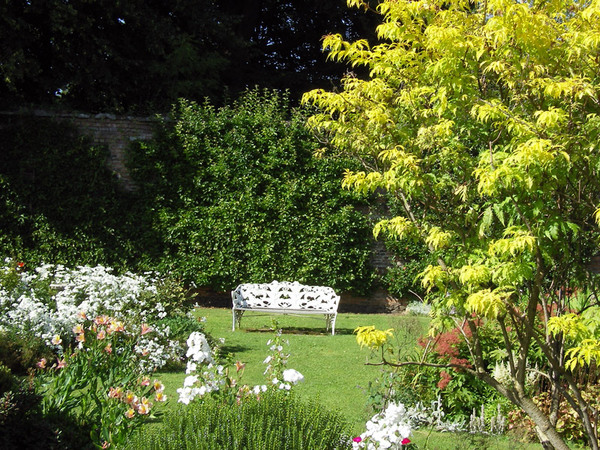 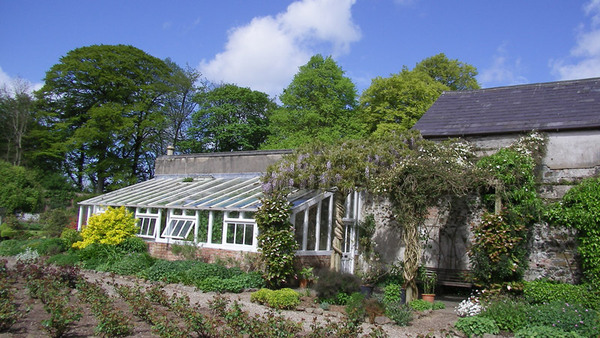 The garden at Benvarden has been enclosed since the 17th Century, when it was most probably a semi-fortified Bawn, built for the purpose of protecting livestock from roaming thieves - Ireland being in those days a fairly lawless country.
Bought by the Montgomery family in the late eighteenth century, it was transformed into a modern - for those days, Walled garden with the bawn wall faced with brick, the height raised to the present 16 ft. and paths and beds laid out. Also, around that time, or slightly later, a Vinery, a Melon house, tomato houses and a mushroom house were created. These are still in the garden and productive.
In 1865, during the Crimean War, the Montgomerys excavated a woodland pond, surrounded by Irish Yews and gravel paths. This fell into decay during the 2nd World war and has been re-created by the present owners, Hugh and Valerie Montgomery. It is now planted with Azaleas, Camellias and, in the spring, Snowdrops carpet the area, followed by Bluebells. The area is canopied by huge Oaks, Beeches and Sycamores and many rare shrubs have been acclamitised and there are pleasant woodland walks.
From the Pond, paths lead to the banks of the river Bush, well-known as the river which leads to the Bushmills Distillery, the world's oldest, and here the river is spanned by a splendid bridge, built by Robert James Montgomery, who survived the charge of the Heavy Brigade in the Crimean war, where his cousin, Hugh Montgomery perished in the famous charge of the Light Brigade.

The present Hugh, Great Great Grandson of Robert James, and his wife, have dedicated and enjoyed many years to preserving and improving this much-loved family property.

Azaleas, Rhodendrons and Camellias enjoy the acid soil as do Mecanopsis and Hydrangeas. An old Magnolia Wilsonii seeds itself profusely in the adjacent Asparagus bed. There are many varieties of Hosta.