Ayodhya  is an ancient city on the south bank of the river Sarayu. It was the capital of the Hindu kingdom of Kosala and the birthplace of Lord Rama. The first book of the Ramayana (the Ayodhyakanda) describes the wonderful city with its busy streets and its palace gardens. This is one of the main sources of knowledge about Hindu gardens. Eg 1/5 (below) and see note on Indian Gardens and Buildings

There, famous in her old renown,
Ayodhya  stands, the royal town,
In bygone ages built and planned
By sainted Manu's  princely hand.
Imperial seat! her walls extend
Twelve measured leagues from end to end,
And three in width from side to side,
With square and palace beautified.
Her gates at even distance stand;
Her ample roads are wisely planned.
Right glorious is her royal street
Where streams allay the dust and heat.
On level ground in even row
Her houses rise in goodly show:
Terrace and palace, arch and gate
The queenly city decorate.
High are her ramparts, strong and vast,
By ways at even distance passed,
With circling moat, both deep and wide,
And store of weapons fortified.
King Das'aratha, lofty-souled,
That city guarded and controlled,
With towering Sal trees belted round,
And many a grove and pleasure ground,
As royal Indra, throned on high,
Rules his fair city in the sky.
She seems a painted city, fair
With chess-board line and even square.
And cool boughs shade the lovely lake 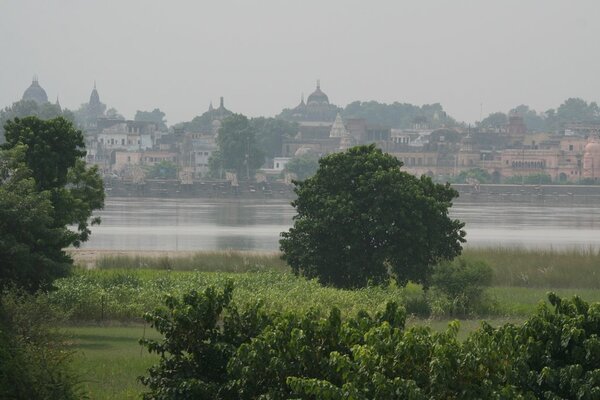