Angkor Wat was built for King Suryavarman II in the 12th century. It was both a temple and a capital city, symbolizing Mount Meru. ‘Angkor Wat’ means ‘City Temple’, with 'Angkor' from the Sanskrit word nagara (capital) and 'Wat' from the Khmer word for temple. Angkor Wat began as a Hindu temple and was converted to Theravada Buddhism. The five towers represent the five peaks of the mountain. The moat and the walls represent the oceans and the surrounding mountain ranges and ocean. An area of 82 hectares is enclosed. The whole complex is surrounded by jungle, which encroaches on the buildings. An extensive sculpture programme represents scenes from the Hindu epics: the Ramayana and the Mahabharata.

The temple of Ta Prohm, east of Angkor Wat and Angkor Thom, is an interesting exercise in conservation/restoration. 'This was the temple chosen by the Ecole Francaise d'Extreme Orient to be left in its 'natural state', as an example of how most of Angkor looked on its discovery in the 19th entury. This was an inspired decision, and involved a significant amount of work to prevent surther collapse and enough clearning of vegetation to allow entry. It has been maintained in this condidtion of apparent neglect. All in all, Ta Prohm's atmosphere has the romantic appeal of, say, a Piranese ruin: partly overgrown and gently declining'. (Freeman, M, Jacques, C., Ancient Angkor Narisa Chakrabongse:Thailand 1999 p. 136) 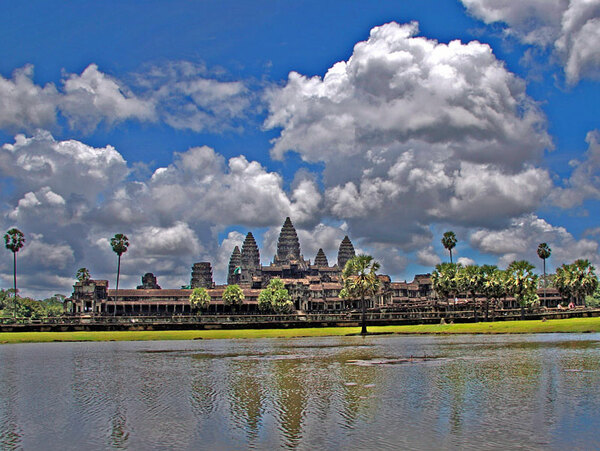