Relative heights of people in scenery

1543. The difficulty in this subject is to know what the conception is that we shall form of the height and magnitude of an object according to different circumstances, its apparent height, as well as its real height, remaining the same. This cannot be reduced to rules, but depends chiefly on a careful comparison of particular instances. One cause, Repton considers, may proceed from the position of the eye itself, which is so placed in most foreheads as to view a certain portion of the hemisphere without any motion of the head. This portion has been variously stated at from sixty to ninety degrees. The eye surveys more in breadth than in height, and more below the axis of vision (fig. 260. a) than above it. Much depends on the projection of the forehead and eyebrows, prominency of the eye, &c., in different individuals; yet the upper angle (a b) will seldom be greater than one half of the lower angle (a c); and Repton ascertained that he could not distinguish objects more than twenty-eight degrees above his axis of vision, though he could distinctly see them fifty-one degrees below it. From hence, he concludes, 'that the distance at which an object appears at its greatest height is, when the axis of vision and the summit of the object form an angle of about thirty degrees; because, under this angle, the eye perceives its full extent without moving the head.' Thus, supposing the eye (fig. 261. a) to be five feet six inches from the ground, a tall object (b), at thirty feet distance, will be seen to the height of twenty feet; at fifty feet distance (c), to the height of thirty feet; at seventy feet distance (d), to the height of forty feet; at eighty-seven feet distance (e), to the height of fifty feet; and at a hundred and five feet distance (f), to the height of sixty feet. (Observations on Landscape-Gardening, p. 21.) At a certain distance from the front of any building, we admire the general proportions of the whole; but if the building can only be viewed within those angles of vision already described, it is the several parts which first attract our notice, and we generally pronounce that object large, the whole of which the eye cannot at once comprehend. Hence it is commonly observed by those who have seen both St. Peter's at Rome, and St. Paul's in London, that the latter appeared the largest at the first glance, till they became aware of the relative proportion of the surrounding space. 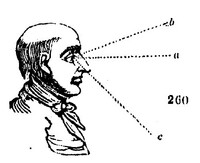