Point of sight in relation to views

1544. The point of sight from which objects are to be seen should he ascertained before any attempt is made to lay out pleasure-grounds; as the same objects which look well from one point of view may appear ridiculous when seen from another. Thus fig. 262. is the ground plan of a piece of ground which is to be laid out as a mixed garden and pleasure ground, in which there are the following details: a, a large tree, which, being a prominent feature in the grounds, the principal walk is made to approach it; b, a boundary fence, with trees planted at regular parallel distances; c, an iron fence to divide the paddock from the garden; d, a piece of water; e e e e, pedestals with vases; f, a fountain; g, a summer-house upon the high ground; h, a sundial in the centre of the lawn; i, a pigeon-house opposite the end of a walk; k, a garden seat placed near an open space between the shrubs, for the convenience of viewing the prospect, where the children of the family frequently feed their favourite cow or ass, which consequently keeps upon the spot when any one is near the scat; l, a rustic basket in the centre of a flower-bed; m m, a seat at each end of the lawn; n, a macaw and stand; o, cow-house, &c. and p p p p p, various flower-borders. Fig. 263. is a view taken from the point A, in which the objects composing it are placed in very ludicrous positions, one over another. For example, the lady in the central walk appears to support on her head a circular bed of flowers, with a rustic basket containing flowers and a forest tree. The lady scated in the garden chiar a little to the left, and in the foreground, supports, first a pedestal and vase, next a lady, chair, cow, and tree; and so on with the rest. To the eye of taste, this arrangement of scenery is quite as offensive as discord is to ear of a musician. The best way of detecting similar errors is by reflecting the landscape from the principal points of view in a small convex mirror; by which means it will be brought within the compass of the eye, seen as a painted landscape in a frame, and any errors in its composition detected. Fig. 264. shows the same landscape viewed from a lower point of sight, in which every object takes its proper place. In laying out a piece of ground with a view to produce the best effect, care should be taken to bring forward all the most prominent objects with a background by no means complex, but produced either by objects in shadow or by broad and flat masses of foliage. Small parts, such as stems of trees, or any objects producing sharp or straight lines, always confuse and cut into the form of the design. (Gray, in Gard. Mag., vol. xix., p. 662.) 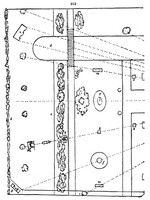