The flesh fly, the cheese fly, and the gnat

1661. The other flies that may be noticed in this place are the flesh fly, the cheese fly, and the gnat. The first (fig. 293. a) is well known to deposit its eggs (b) both on raw and cooked meat, when the slightest symptoms of taint begin to appear. The young larvï¾µ are at first very small (c), but progressively increase in size; and when full grown (d), quit the interior of their loathsome habitation, and, burrowing beneath it, change into an oval smooth chrysalis (e), of a deep chestnut colour. Leuwenhoek has calculated that the eggs of a pair of these insects, in two generations (which would be produced in three months), would give the astonishing number of 700,000 descendants. The cheese fly (M. putris) (g) in its maggot state (h) is well known to housewives by the name of hopper: the chrysalis (i) is oval, smooth, and brittle, and the perfect insect is a deep black, with very clear wings. The common gnat (Culex pipiens) (fig. 293. k), as a larva, resides in water; and hence the winged insect is always most abundant near low and marshy places. It is not generally known that the common musquito of North and South America, and of Europe, has every appearance of being the same species as that found in England. There are, however, many other distinct, though less common, species in the south of Europe; and others in America, ornamented with beautiful metallic colours. 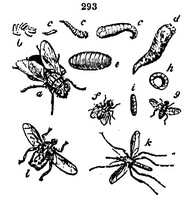