Apterous or wingless class of insects

1662. In the Apterous or wingless class of insects, there are a few which demand attention from their hurtful qualities; these we shall notice, without entering into the natural arrangement of the tribes beyond what is stated in paragraph 1625. The red spider or mite (A'carus telarius) (fig. 294. a, much magnified) is the most injurious, as it infests the pine-apple, and other choice fruits, no less than plants. Washing both sides of the leaf with Read's, or any other approved syringe, is considered the most efficient remedy; but the insects, dashed to the ground by the stream of water thus directed against them, must be afterwards carefully sought after and killed; otherwise they will again ascend the plant.* Another mite (A. holosericeus L.) (b) has also been called the red spider: both these are very small, and may be destroyed in the same manner. Carrots and parsneps are often much injured by a small centipede (Scolopendra clectrica L.), and the different kinds of ringworms (Juli L.); all of which form their habitations within the roots. The wireworm, as before stated, does not belong to this order. Figures c, and d (f magnified) represent two species of ticks which fasten themselves upon and suck the blood of dogs. The woodlouse (Oniscus) lives secluded from the light, and does great mischief, feeding principally upon young vegetables and roots, especially such as are kept under glass. Another species (O. aquaticus L.) (fig. 294. e) is aquatic; it is of a small size, but when magnified (g) somewhat resembles the other. Spiders, notwithstanding the prejudices of many people, are useful in catching and devouring insects. 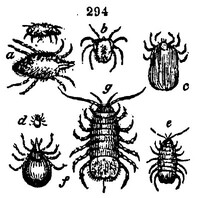