1643. Caterpillars not injurious to cultivated vegetables, but which may be introduced in gardens, are of the following butterflies:-1. Swallow-tail butterfly (Papilio Machaon) (fig. 284.). The caterpillar is green, but each segment of the body has a black transverse band, relieved by small, round, reddish spots: its natural food is umbelliferous plants, particularly the fennel and the carrot; when full-fed it is about two inches long and changes into a greenish chrysalis; and there are two broods in the year. This is the most beautiful, and one of the rarer British species.-2. The Brimstone Yellow butterfly. The caterpillar is of a pale green, with a whitish stripe on each side, and a reddish brown head; and when full fed, it measures one inch and a half in length: it feeds on the buckthorn and wild rose. There are also two broods in the year of this species.-3. The Orange-tip butterfly. The caterpillar of this species is entirely of a pale green colour, very much resembling that of the turnip butterfly, but without the small eye-like spots observable on the sides of that species. It feeds on the Cardamine impatiens, Brassica campestris, Turritis glabra, &c., preferring the seeds, and becomes full fed in July, when it is rather less than an inch and a half long: the butterfly appears in the following May.-4. Atalanta, or Scarlet Admirable, butterfly. The caterpillar is blackish brown; rather less than two inches long, when full grown; and is covered with little spiny prickles. It feeds on the nettle, and the butterfly appears in August.-5. Painted Lady, or Thistle, butterfly. The caterpillar, in its form and size, resembles the last, but its colour (according to Lewin) is either dark or pale brown, and sometimes even yellowish. The eggs are generally laid on thistles, docks, and nettles: and in the first week in August the butterfly appears. - 6. The peacock butterfly. The caterpillar of this very elegant butterfly agrees with those of the two last species in size and shape, but the spines are longer: on each change the skin becomes darker, and finally block, powdered all over with small white specks. It feeds on nettles. The latter end of June, they suspend themselves by the tail, and change into chrysalides; in three weeks the butterflies appear. Some of these butterflies live through the winter, while others remain in the pupa state until the spring. - 7. The Elm, or Large Tortoiseshell, butterfly. The caterpillar is about an inch and three quarters long, of a light chestnut brown colour, with one or two blackish lines on the sides, and the body covered with short hairy prickles like the last four species. It is found upon elm trees in sheltered situations; and is very social, feeding together, and not separating till new the time of transformation. There generally appears to be two broods of these insects in the year.-8. The Nettle, or Small Tortoiseshell, butterfly (fig. 285.). The eggs (a, natural size and magnified) are deposited on the nettle, and from these the young caterpillars issue about the middle of May: they are then of a light colour, and live together on the top of the nettle, which they enclose within a large loose web. After casting their fourth skin, they change to black, and separate into companies; but when they have acquired their sixth or last skin (b) they become yellowish on the back, and feed singly. The perfect butterfly (d) appears in June.-9. The Comma butterfly, so called from having a mark resembling a comma on the under side. The caterpillar is readily known from all the preceding, by being of a bright chestnut colour, with the hinder and largest portion of the back pure white; there are also several short spines on the body. This caterpillar is generally found secreted beneath the leaves of the hop or nettle; the butterflies appear towards the middle of August. 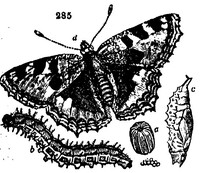