WH Whyte on the social life of small urban spaces

Since Alberti's time, the function of urban places has diversified. Many have acquired a recreational function. In England , they even became communal gardens belonging to those who lived in the surrounding houses [Fig 4.11]. We call them 'squares', reserving 'plaza' for busier places. In the modern city we think of the urban plaza as an intensively used 'architectural' space for sitting in the sun, eating sandwiches, taking a lunch-time stroll and watching the world go by. These functions, one might think, necessitate planning criteria which differ from those for mark et places. Such a thought could easily lead the planner astray. William H Whyte conducted a brilliant research project on the plazas of New York City (Whyte 1980). Following the logic of the above account, he assumed that the most popular plazas would be those with the best climate and the most beauty. Time-lapse photography was used to test this assumption. Work began in the spring of 1971 and early results confirmed the hypothesis. People were observed to sit in sunny spots and to move around as the sun moved around. Whyte was delighted. But when spring turned to summer this no longer happened. It became clear that some plazas were enormously more popular than others, and that popularity had little or nothing to do with microclimate or design. Photography continued for several years and the results were analyzed. Gradually, it emerged that the prime factors governing the use of New York plazas were astoundingly similar to those which have led to the creation of urban places throughout history. Whyte found that in New York plazas are most used at lunchtime ï¾­ and only if they have good access, food for sale, and plentiful seating. The relationship between plaza and street is 'the critical design factor'. Having been drawn into the plaza 'people tend to sit most where there are most places to sit'. Quantity and variety of seating have more influence on use than either sun, aesthetics, shape, or size. But microclimate can be important. People seek warm places in cold weather and will avoid gusting winds around tall buildings. 4.12 Jane Jacobs examined four similarly located urban squares in Philadelphia . She found only one them to be successful. Why? Whyte's experimental results confirmed Jane Jacobs observations in Philadelphia . She examined four urban squares which appeared similar from a map [Fig 4.12]. They were the same size and had the same relationship to the City Hall. But she found only one square to be successful and popular: the one which was surrounded by a diversity of land uses. The presence of a major public building, like an art gallery, can be a great contributor to the success of a plaza. A space without pedestrian generators will have few pedestrians. An earlier observer, Camillo Sitte, noticed that strong gusts outside medieval cathedrals tended to raise the ladies skirts (Sitte 1979 edn: 87). But the poor microclimate did not discourage visitors. Le Corbusier, who persuaded so many designers to build towers, was unaware of the effect of high buildings upon microclimate. Sitte believed that squares should have an open centre, an enclosed character, correct dimensions, and an irregular shape. He discovered that 'the average dimensions of the great squares of the old cities are 142m by 58m' (Sitte 1979 edn: 18). Modern designers should learn from the past. We do not have to reï¾­invent the square, or the wheel. A square needs high accessibility and/or things to buy if it is to be well used. Little has changed, except that the world's cities have been filled with badly-located, odd-looking under-used places, plazas, piazzas and squares. 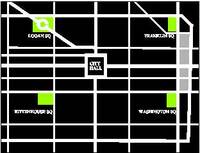 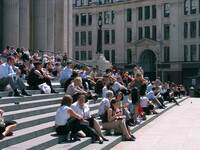 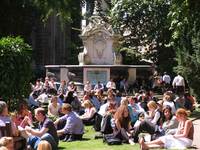