Urban squares started as markets and many should continue to have a commercial role. Urban plazas are bounded yet unbound. Since the exchange of goods was one of the primary reasons for creating towns, ancient settlements had a special place for trade in their midst [Fig 4.8]. Often, it was no more than a swelling in the road, to accommodate weekly markets. During the Italian Renaissance, the custom arose of designing such places as formal squares, with dignified proportions and handsome architecture. This changed their appearance but did not stop them operating as markets. Alberti advised that 'The squares must be so many different markets, one for gold and silver, another for herbs, another for cattle, another for wood, and so on' [Fig 4.9] (Rykwert 1955: 173). 4.8 Urban 'squares' were originally used to hold outdoor markets. Palladio also saw squares as mark ets, but added that 'they afford also a great ornament, when at the head of a street, a beautiful and spacious place is found, from which a prospect of some beautiful fabrick is seen, and especially of some temple' (Palladio 1965 edn: 72). Ornament is sometimes thought to be the primary purpose of squares and plazas and an American has suggested that 'most of our urban open spaces seem to be designed largely for the convenience of architectural photographers' (Taylor 1981 edn: 11). They are exposed and empty, with uncomfortable seating and a prohibition on street trading. Their managers should remember President Clinton's 1992 campaign slogan: 'It's the economy, stupid'. Selling goods r ema ins an excellent use for public open space [Fig 4.10]. 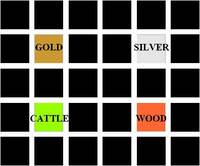