Spatial plans should show the existing and proposed spatial patterns. Spatial containment is a definable aspect of scenery. It is pleasing to walk in an urban square with contained views, in an urban space with one distant view, in a valley with seaviews, in a "lost valley" secreted within a town, in a broad avenue focused on a distant hill or monument, in a narrow space, in a broad space, or on a route which sequentially narrows and widens. These experiences, which are all consequences of spatial geometry, can happen by chance or they can be planned. Spatial planning requires concepts and policies. There is a fundamental difference between perceiving the space, which is an empty void, and perceiving the elements which contain the space [Fig 2.25] There is a fundamental difference between perceiving the space and perceiving the elements which contain the space. Architects use walls and roofs to contain indoor space. Landscape architects use mounds, trees, buildings, walls, fences and other enclosing elements to contain outdoor space. Indoor space tends to have one legal owner. Outdoor space tends to have many legal owners, which can make spatial planning difficult. 2.26 Space can be designed in cross-section (a), at ground level (b) at eye level (c), or from birdseye level Types of spatial plan Plans for outdoor space can be made at different levels: Cross-sections [Fig 2.26a] show the elements which contain space. Ground plans [Fig 2.26b] show what is happening at ground level, including the exact location of trees, buildings and property boundaries. They are, in effect, cross sections taken through buildings and vegetation at ground level. Eye-level plans [Fig 2.26c] are drawn at a level which is intermediate between ground plans and aerial plans. They show, in principle, the boundary of the space which can be seen by an individual observer standing in a defined location and rotating their eyes through 360 degrees. Or they can show the boundary of the space which is seen by an observer moving through a space from point to point. Aerial plans [Fig 2.26d] can be thought of as hand-drawn aerial photographs. They are a usefully pictorial way of representing places, but they show a view of the world which is normally available only to helicopter pilots. As we who love aerial photographs know, aerial views can differ greatly from eye-level views: even familiar places can be unrecognisable. Eye-level plans are the most appropriate tool for spatial planners. Like Giambattista Nolli's famous 1748 Plan of Rome, they show visible space in white and non-visible space in black (Trancik, 1986:99). 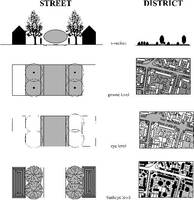