Skylines are among the most memorable features of cities. The foregoing sections, on scenic plans, spatial plans and image maps, deal with the representation of scenery on 2-dimensional plans. Skylines are also important. Wayne Attoe wrote a most interesting book on the subject (Attoe 1981). He discusses skylines, in successive chapters, as collective symbols, as social indexes, as orientation aids, as features in urban rituals, and as icons which are venerated by city inhabitants and visitors. Each of the points is persuasive and the author concludes with a discussion of what should be done. Some people welcome dramatic new buildings as a sign of progress; others hate them. Skylines are a defining issue in urban planning. On the one hand, they are cherished public goods. On the other, it seems whimsical to halt the commercial or artistic development of a metropolis, or a locality, because it would 'marr the skyline'. New York and Hong Kong could not have developed if conservative skyline controls had been in existence. Florence , Paris and the 'dreaming spires' of Oxford would be wrecked if skyline controls were relaxed. Regulation can be achieved by financial incentives, by design review boards, by urban design plans or by zoning controls. Attoe insists there is no one right answer: The issue is not whether to have controls, but which controls to have and where to have them apply. The principal criticism of existing skyline controls is that are routine rather than imaginative. They accomplish too little (Attoe 1981:117). From 1960-1980 the skyline of East London was spoiled by an unplanned spatter of high buildings. Between 1980 and 1990 a more pleasing aesthetic effect was produced by grouping high buildings together and placing an especially tall building with a pointed roof in their midst [Fig 2.29]. This happy result was not the produced by a skyline policy. It came about because the Isle of Dogs was made into an Enterprise Zone in which normal planning controls were relaxed. Some people continue to dislike the Isle of Dogs skyline and the tall buildings certainly produces a windy and chaotic effect at street level [Fig 2.30]. Yet they may come to like it time. Abercrombie was right that different cultures and historical periods produce characteristic skylines [Fig 2.31]. 2.31 Abercrombie was interested in urban cross-sections We may wish to conserve historic examples and to allow the development of new skylines elsewhere. Policies can be set out in cross-section and on Roof Contour plans. [Fig 2.32] Skylines can be planned and mapped, using elevations (above) and roofscape contours (below). 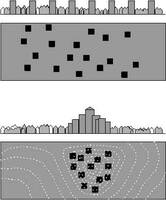