Kevin Lynch believed that the visual quality of cities can be studied from the mental images held by its citizens. He was particularly interested in the quality of 'legibility' and sought to represent it on image maps. [Fig 2.28] Image maps show the paths, edges, nodes, districts and land mark s. The contents of the city images... can conveniently be classified into five types of elements: paths, edges, districts, nodes and landmarks (Lynch, 1960:46). After using interview techniques to carry out image analysis, Lynch urged the preparation of a visual plans to: ... prescribe the location or preservation of landmarks, the development of a visual hierarchy of paths, the establishment of thematic units for districts, or the creation or clarification of nodal points (Lynch, 1960:116). Image maps are a good way of representing the features which compose our mental images of particular cities. They can lead to plans for improving the city image, though Lynch acknowledged that such plans should fit in with all the other aspects of planning. 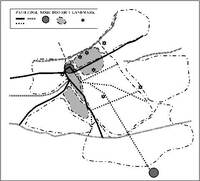