The rain falleth on the just and on the unjust, on the road and on the field. From the field, it seeps into the ground. From the road, it runs into drains. Man has had a great influence on surface water runoff. Since all the water which comes out of the sky has to go somewhere, and since life on earth would be impossible without water, it surely follows that plans for the management of rainwater must be prepared and implemented. It is not merely a question of "drainage", "stormwater management" or "catchment management", which is the impression given by conventional textbooks. Water management plans should show areas for enhanced detention, infiltration and evaporation. The old method of dealing with rainwater was engineering: if a puddle forms, dig a drain; run the drain into a river; if the river floods, build an embankment; if it still floods, deepen the channel; when the channel is breached, clear the floodplain of buildings and vegetation; when the waters continue to rise, dig bypass channels and storm detention ponds. Successive schemes of this type, implemented with goodwill, have greatly accelerated the volume and speed of rainwater discharge, as will be discussed in Chapter 9. This has dried-out upstream land and caused downstream floods. Wetlands have become drylands. Rivers no longer run. Trees have died. Ever-increasing sums are required for upstream irrigation and downstream flood control. Engineers have appreciated the problem and responded with engineering solutions. Storm detention has become popular. Rainwater is now collected in engineered ponds and underground tanks, so that it can be discharged slowly, with computer-controlled sluices, into sewer and river systems. This is an expensive and dubious policy: delaying the discharge of water prior to the flood peak may raise the eventual flood peak. The real solution depends more upon planning than engineering. We need to think globally and act locally, as advised by the Friends of the Earth. Urban water-planning must be fully integrated with urban space-planning. Planning and environmental impact controls should be used to achieve what were once thought to be engineering objectives. Fig 2.12 Surface water management policies should relate the pattern of development to underground drainage conditions. These policies can be shown on Venn Diagrams, Cross Sections, Maps and Tables. Waterspace plans are required to show the spatial dimension of surface water management. They can utilise different management policies for different areas of land, depending on subsurface and land use conditions. The policies can be shown on diagrams [Fig 2.12], to indicate the types of measure which may be adopted: A. Low density development on permeable soils: all surface water should be infiltrated within individual property boundaries. Developers should make conservation ponds within the gardens of residential properties. Runoff from roads should pass through oil traps before it is infiltrated. B. High density development on permeable soils: surface water must be detained and infiltrated. Landowners may join together to operate joint facilities. Where conditions permit, this should include a surface water area which is available for recreational use. C. Low density development on impermeable soils: as much water as possible should be stored on site. This may be done in boggy conditions, so that water can be evaporated and transpired. Excess water should be allowed to run off, but at no faster rate than in natural conditions. D. High density development on impermeable soils: foster evapo-transpiration. Grass roofs should be used to detain, evaporate and transpire surface water before it reaches the ground. Water should also be stored in tanks to irrigate vegetated roofs in dry weather. If the rate of surface water discharge is accelerated, it should be conducted to surface water infiltration sites (eg in parks), just as foul sewage is conducted to sewage farms. The planning principle is that rainwater should be detained and infiltrated as near as possible to the point where it falls. This will result in areas of less-permeable soils having more surface water - and more potential for the creation of wetland habitats. Recreation is another aspect of waterspace management. Every questionnaire, every travel brochure, every study of trends in outdoor recreation has identified access to water as the prime goal of leisure trips. People want homes which overlook ponds, reservoirs, lakes, rivers and oceans. They want to see the rich wildlife which is found in wetland habitats. They want to catch fish, whether or not others approve of fishing. They want to swim in fresh un-chlorinated water. They want places in which to use canoes, sailboats, modelboats, motorboats, water-skis, houseboats, leisureboats. Making adequate provision for these activities is a very important aspect of open space planning, despite the fact that waterspace has not been regarded as 'open' space in any of London 's open space plans (Turner 1992) 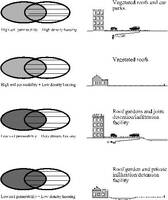