Biotope management plans should indicate the desirable mix of habitats, based on historical analysis, hydrology and pedology Biodiversity is desirable. I do not know whether species extinction does any harm to mankind, but I do know that I would like to have a greater range of species near my home and that I would like a wide range of species to exist in other countries. Terrestrial habitats, however, are in constant flux. On a geological timescale, regions become humid and arid, marine and submarine, hot and cold. Our historical records go back about 5,000 years. It is surprising that only 10,000 years have passed since Britain was glaciated, the sea level was lower and one could walk from France to England . But in the last ten centuries, man has been the strongest influence on habitat change. Natural habitats, in the sense of habitats which are free from man's influence, occupy only a tiny fraction of the land in developed countries, like England . The quantity and quality of habitat-types is a proper subject for planning. Guidance on habitat mapping is provided by English Nature (Nature Conservancy Council, 1990). Since the 1960s, public consternation at loss of "nature" to "development" has grown. Now we can redress the balance. Every region can prepare plans which show: - natural habitats - semi-natural habitats - proposals for habitat re-creation - proposals for biological corridors to interlink habitats Biologists studied the characteristics of individual plants and animals before they came to study whole communities. Ecology is largely a twentieth century development. It began by studying relationships between individuals and their environment, progressed to the study of habitats and is now examining groups of related habitats. The later discipline, known as landscape ecology, can encompass habitats in which man is the predominant species. According to the theory of island biogeography, "island" habitats, not linked to other habitats by biological corridors, have less biodiversity (MacArthur & Wilson 1967). Biological corridors can run through land with or without public access, beside rivers, roads, railways, canals and other public utilities (Smith & Hellmund, 1993). Habitat potential plans will indicate patches, which have the potential to be developed as new habitats, and corridors, which can provide linkage. [Fig 2.13] Habitat plans should indicate the presence of existing habitats and the potential for new habitat creation. Every part of a town has habitat potential, which can be realised when particular types of development take place. If, for example, a high-volume multi-lane road is built through an existing urban area, it is likely to have vegetated embankments. If a low-volume road is built, it can be a "green lane". If a new building is erected, it can have a vegetated roof. If a shopping centre is built, it can have strips of native plants, instead of ornamental shrubs, round the car parks. Habitat Potential Maps will guide developers as to what sorts of habitat should be created on particular types of land. They can also guide the creation of new habitats on parkland, utility corridors, school grounds and other areas which are vegetated but which are not best-suited to ornamental horticulture. 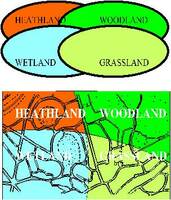