Canals should not belong to transport agencies. At one time, canals were a cause of negative sideï¾­effects. Their use in transporting coal, iron ore and other heavy materials made them into industrial zones where it was unsafe for children to play, and where adults had no desire to walk. Canals were the autoroutes of their time. Since heavy traffic has moved to roads and railways, small canals have become redundant as commercial waterways and are used mainly for leisure. The Canal San Martin in Paris is unusual in that it was built at the end of the canal age and treated from the start as an aesthetic amenity in the city. Subsequent changes have made it into an amenity park. Most waterway authorities have welcomed the twentieth century growth of leisure traffic, as a new source of revenue, but they have been unwilling to find new ways of relating canals to the environment. Canals should be a focus for urban renewal projects. Except for lock gates, they are safer than either rivers or the sea. In 1938 Mumford suggested that 'they should, in fact, become the backbone of a regional park system' (Mumford 1938: 332), as many of them have. But to have this role, they should not belong to profit-oriented transport authorities, like the British Waterways Board. Birmingham, which has a greater length of canal within its boundary than either Venice or Amsterdam, was a pioneer of canalside reclamation in the 1960s. At first, it was able to redevelop only the nonï¾­towpath side of a few parts of its canal system. The first major project, James Brindley Walk, overlooked a marvellous canal basin but did not make any use of British Waterways Board 'operational' land. A report on the city centre canals, in 1972, recommended using the towpaths to form a pedestrian 'inner ringwalk', which would complement the city's 'inner ringroad' (Bayliss & Turner 1972). No action was taken for a decade. When the first edition of this book was published, the canal, on which the proposed ringwalk was based, remained hidden behind high fences and grim buildings - because canals were still conceived as transport arteries and places of danger. Now, the canal has been transformed into a great urban amenity which allows walkers to see the Farmers Bridge flight of locks - surely the most remarkable scenic feature in Birmingham. It is very difficult for a canal transport authority to convert itself into a leisure provider and real estate developer. In America, the problem was tackled by making 296 km of the Chesapeake and Ohio Canal into a National Historical Park, managed for recreation. 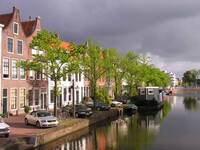 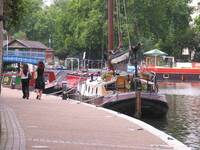