Apart from the idea of privacy and protection, Garden Fences are considered an important ornament of the grounds, and with this view they are frequently introduced to divide and give interest to different portions of the same garden (see Fig. 18). They were first extensively employed in the Kamakura Period. Later, when the Tea Ceremonies came into vogue during the suprem- acy of the Ashikaga Shoguns, there are said to have been twenty-five different kinds of Fences invented. Other books refer to as many as thirty-five varieties, but in some of these the points of difference seem to have been very trifling. 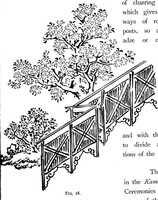