790. The gardens and palace of Shyhinqua are thus described by Mr. Main, from personal inspection, in the years 1793 and 1794 ; and the description is amplified, in order to convey a general idea of Chinese landscape-gardening. These gardens are situated in the southern suburbs of Canton, bordering the river. The stranger enters a vast assemblage of buildings for every purpose of life, of various sizes and characters. Among these, the seraglios for the old as well as for the young wives of the proprietor, and the chapel, where are deposited the ashes of his ancestors, are the most conspicuous and splendid. Proceeding, the stranger is conducted into the garden. Here no coup d'ï¾µil calls for admiration, no extent of undulating lawn, no lengthened vista, no depth of shadowy grove, no sky-reflecting expanse of water,-nothing presents itself but a little world of insignificant intricacy. The ground appropriated as a flower and pleasure-garden is a space of two or three acres, laid out in numberless little square plots, surrounded, parted, and re-parted, by low walls of brickwork, surmounted by broad copings, on which are set in order porcelain pots of all shapes and sizes, containing flowers and flowering shrubs. The exterior, as well as the interior walls of the garden, are covered with most ridiculously fantastic trellis-work (fig. 221.), on which are trained various climbing and creeping plants. The walks, or rather paths, are neither wide nor level enough for comfortable or even safe walking,-intentionally uneven, and broken into holes and foot-traps ! The pieces or ponds of water, an indispensable feature in a Chinese garden, are thickly covered with 'the green mantle of the standing pool,' to obtain which the Chinese bestow no small pains ! One favourite walk deserves particular description, because it is considered a chef d'ï¾µuvre of the gardener's art: a wall, eight or nine feet high, is built along one side of a pond, betwixt which and the wall a narrow irregular path is made, but so narrow, that it is with much difficulty a person can edge himself along it ; and, as the water is permitted to reach the wall in different places by breaks made in the walk, there is even danger of slipping into the water almost at every step ; and this difficulty is called 'pleasure' to the walker himself, or at least to the beholders of his embarrassment ! Another peculiarity in their garden-walks is, when leading through a group of trees and shrubs it must pass between the thickest of the stems, for no other purpose than to produce annoyance to the pedestrian. In short, except the beauty and rarity of the plants, the visiter finds nothing interesting in their style of gardening : no scope of ornamental disposition ; no rational design; the whole being an incongruous combination of unnatural associations (fig. 222.). In one place a piece of craggy rock (real or artificial) is seen jutting out from among a tuft of the most delicate garden flowers ; fantastic bridges without water,-unsightly excavations without character or beauty,-the whole being only a repetition of petty attempts at variety, on a no greater scale than the patchwork of a citizen's court-yard. In some instances they appear to have a relish for some of the most striking features of uncultivated nature ; such as antique trees (fig. 223.), rugged rocks, mossy caves, &c. but these are all imitated on such a diminutive scale, that the attempts are truly ridiculous. This love of the grotesque not only appears in their gardens, but also is frequently seen in the yards of tradesmen in the city. A pile of rugged stones is placed in a corner ; on this are planted dwarfed trees and flowers ; and if it is wished to produce a resemblance of a grove of pines in miniature, the common Equisetum (horsetail) is employed for that purpose ! (Gard. Mag., vol. ii. p. 136.) 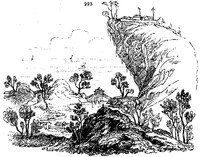