567. During the reign of William and Mary (1689 to 1702) gardening, Switzer says, arrived at its highest perfection. King William, Daines Barrington informs us, gave vogue to clipped yews, with magnificent gates and rails of iron, not unfrequent in Holland, and about this time (see Huetiana) introduced into France, and, in reference to the opaque stone-walls which they supplanted, called there clairs-voyees. The most extensive iron screens of this sort in England, next to those of Hampton Court, were formed by Switzer, at Leeswold, in Flintshire, laid out by that artist in a mixed style, or what is called Bridgeman's first manner. Hampton Court being at this time the actual residence of the royal family, the gardens underwent considerable improvement. An elegant alcove and arched trellis were added at the end of one of the alleys, and four urns placed before the principal part of the house, supposed by Daines Barrington (Archï¾µologia) to be the first that were thus used in England. Towards the end of this century, vegetable sculptures and embroidered parterres were probably in their highest vogue; a conjecture confirmed by the works of Le Blond, James, Switzer, &c. published during this and the following reign. Longleat, the magnificent seat of the Marquess of Bath (fig. 179.), belongs to this period. 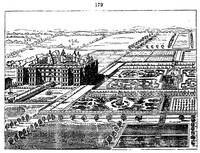