568. Notes were made on some of the gardens round London by J. Gibson, in the year 1691, which have been subsequently published in the Archï¾µologia. (vol. xii.). Many of those mentioned by Evelyn are included, and spoken of in nearly the same terms by Gibson. Terrace-walks, hedges of evergreens, shorn shrubs in boxes, and orange and myrtle trees are mentioned as their chief excellences. The parterre at Hampton Court is said to resemble a set of lace patterns. Evelyn himself is said to have a 'pleasant villa at Deptford, a fine garden for walks and hedges, and a pretty little greenhouse with an indifferent stock in it. He has four large round phillyreas, smooth-clipped, raised on a single stalk from the ground, a fashion now much used. Part of his garden is very woody and shady for walking; but, not being walled, he has little of the best fruits.' Sir William Temple's Essay on the Gardens of Epicurus appeared about the same time. His picture of a perfect garden is that of a flat, or gentle declivity, of an oblong shape, lying in front of the house, with descent of steps from a terrace extending the whole length of the house. This enclosure is to be cultivated as a kitchen-garden and orchard. Such a garden he found at Moor Park, Hertfordshire, laid out by the Countess of Bedford, celebrated by Dr. Donne, 'the sweetest place, I think, that I have seen in my life, before or since, at home or abroad.' Walpole, in his enthusiasm for the modern style, observes on this description, that any man might form as sweet a garden, who had never been out of Holborn.-It has long since been destroyed, and its place occupied by lawn and trees. Fig. 180. is a view of Wollaton Hall and gardens, near Nottingham, as they appeared in 1696. The gardens are extensive and laid out in the Italian style, with terraces, statues, fountains, urns, orange trees in boxes, and, what is more remarkable, an orangery with a glass roof, which must have been one of the first of that description erected in England. The designers of this structure, and, probably, also of part of the gardens, must have been London and Wise, the great nurserymen and garden architects of that day. The architecture of the house, which was built in the time of Queen Elizabeth, was reckoned the chef d'£uvre of Thorpe, who was the architect of Holland House and Burleigh. (Gard. Mag.) 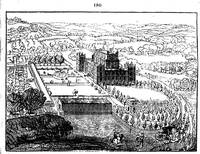