357. The villa and gardens of Watthalden, near Ettlingen, contain about sixty acres, and were laid out, in the English manner, by M. Hartweg, of Carlsruhe, about 1820. They are situated on the irregular declivity of a hill, and display very extensive views over a flat country to the Rhine. The disposition of the plantations in groups is good; and the mixture of cultivated spots, corn crops, and vineyards, gives a character of usefulness which is agreeable, because it is humble and universal. The upper part of the hill is covered with natural woods, which stretch along the summits of other hills, till they join the Black Forest. The house (fig. 109.) is in no respect remarkable, but it is commodious. This garden is open to the public under the following conditions, which are printed in large characters, and placarded on a board at the entrance gate:ï¿½'Whenever the gates are opened, every one that chooses may enter in, on the following conditions: 1st, Not straying out of the paths. 2d, Neither gathering leaves, flowers, seeds, or fruits, nor breaking off shoots of trees. 3d, Not letting children go without attendants. 4th, Not bringing in dogs. 5th, Neither writing on statues, walls, or other objects, nor cutting letters in the bark of trees; and 6th, Not smoking. ' The proprietor of this villa, in 1828, was Bersted, the prime minister of the Grand Duke of Baden. 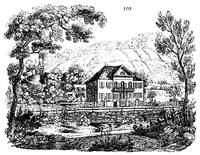